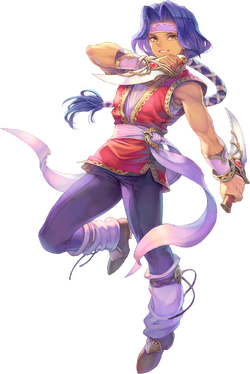 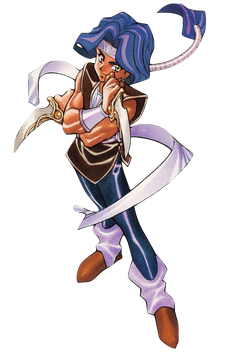 Nevarl, Fortress in the Sand

Hawkeye (ホークアイ, Hōkuai) (Hawk in the fan-translation) is one of the six main characters of Trials of Mana.

"Eagle... don't worry. I won't let anything happen to Jessica! I have to leave now, but... I will be back to avenge your death, dearest friend, and save your sister! I hope Jessica will stay safe until then..."
—Hawkeye

Hawkeye is a member of a guild of noble thieves based in the Nevarl, Fortress in the Sand (Navarre in the fan translation). The guild's leader, Lord Flamekhan, suddenly and uncharacteristically declares Nevarl to be a Kingdom. Surprised by this, Hawkeye discusses the matter with his friends and Flamekhan's children, Jessica and Eagle. Hawkeye and Eagle decide to confront Flamekhan about it only to find that he is in the middle of a meeting with his assistant, the witch Isabella, who turns out to be pulling Flamekhan's strings. Isabella (who later reveals that her name is "Bigieu") casts a spell on Eagle to make him attack Hawkeye, who gravely injures Eagle in self-defense. Though Hawkeye manages to snap Eagle out of Isabella's control, she kills him herself and puts all the blame on Hawkeye. He is imprisoned and is awaiting his execution when Isabella informs him that she has given Jessica a cursed necklace; should Hawkeye tell anyone the truth or kill Isabella, the necklace will kill Jessica. Luckily, Hawkeye makes an escape with help from his feline friend Nikita. Once free of Nevarl, Hawkeye decides to travel to the Holy City Wendel in hopes of finding a way to break the necklace's curse.

Hawkeye shares many story elements with Riesz, who comes from the Wind Kingdom Laurent (Rolante in the fan translation) which is taken over by Nevarl. If either of them is chosen as the main hero in Trials of Mana, the main villain will be the Dark Prince and the final dungeon will be the Dark Castle.

In Heroes of Mana it is revealed that he is the son of Falcon and Sandarrow, making Flamekhan his Grandfather, Eagle his half-uncle, and Jessica his half-aunt. Flamekhan sees his daughter Falcon as traitor to his people, he however accepts her wish to raise Hawkeye in her stead should something happen to her. He, however, makes it clear that his grandson is dead to him and that he will raise Hawkeye as if he were an orphan with unknown origins.

As a thief, Hawkeye has the highest Agility and Luck stats among the protagonists, giving him an advantage when dodging enemies and opening booby-trapped treasure chests. His standard attacks are unique in that he launches two attacks, which can actually allow him to do more damage than characters that have greater strength than him, provided he can connect with both attacks. After changing classes, Hawkeye gains a variety of other useful abilities. His Light classes use traps, modified throwing items, and a wide variety of Dryad and Luna support spells. His Dark classes allow him to use ninja techniques that lower attributes, cause status effects, and deal damage of the four classical elements.

Drawn to the natural world and the wild, those of such affinity are those known as Rangers, being those that seek to understand nature and journey throughout the lands beyond civilization. As every adventure into a world beyond men has them learn of nature's workings and order, so do Rangers come to gather great knowledge and wisdom of the outdoors, with understanding of the science of the environment and terrain, and a growing lexicon of each clime and realm's flora and fauna to identify and look out for. As the best of Rangers know that survival is the basest instinct to nature's more ferocious side, so are they wise to arm themselves as well with their study of nature, with traps and magic to help utilize the world around them and further draw upon the power of nature in the heart of the fight.

Adventuring the roads not often traveled, the Nomad is the very class that treads this way of life. Having distanced themselves from the heart of society and heeded a call to nature, the Nomad lives life within the wilderness, learning of the natural world's mysteries and uncovering discoveries that only lie within the depths of its realm. Though they travel in the serenity of the natural world and with an awareness brought about through their solitude, they are also not without knowledge of its many dangers, armed and long wizened with knowing how to survive against such troubles and fight back. Along with expertise in ways of battle, the Nomad has also attained the mystical powers of nature on their travels through learning to commune with the spirits of the natural world, allowing them magic that can aid or hinder in times of strife.

The Rogue is a fighter whose definition is that of a renegade, and comes to travel back and forth between the natural world and the reaches of civilization. A wild and rambunctious lot, the Rogue's actions are not mutual to their beliefs, walking along the lines of "the end justifies the means", and when push comes to shove, to "seize the day" and "the victor is the last one standing". Living life like a day to day struggle to survive, the Rogue employs not just fearsome skills with the knife, but to also utilizing traps and secondhand weaponry with sleight of hand to turn the tables on their enemies, kept in mind to all sorts of foes and to all kinds of situations. Though they live in the straights of "survival of the fittest" and a brutal, nearly merciless disposition, they hold true to what they believe in and have their own definitions of right and wrong.

Taking the thief's underhandedness and trickery into martial application, the ways of the Ninja are those of fighters with battle conduct taken from warriors of another land, renowned for their skills of stealth, deception, and sabotage, allowing them to knock down opposition and defeat enemies without a trace. Further driving their aptitude in fighting and skill is that of their repertoire of secretive and elusive arts known as Ninjutsu that make up their styles and methods, allowing them their proficiency and ferocity in the heat of conflict and tension. Such arts are said to not just comprise of training in the physical and technical, but also that of the mystical; rumored are that Ninja delve into intense spiritual refinement, and come to gain their own ways of magic from this training, from being able to mold and manifest objects purely from their own spiritual energy, to harmonizing and manipulating the natural energy of their surroundings to attack their enemies.

Amongst of all ninja, there are only followers, and then there are masters. The Ninja Master instead follows the path of the ninja with virtue and devotion, turning to focusing on mastering the basics and reinforcing the foundations to their ultimate limit. Because of this intense adherence to training, the Ninja Master is able to utilize even the most basic ninjutsu in the most devastating ways, wields blades with such proficiency that makes their attacks seem like a storm of blows, and has mastered the art of stealth to where it is if the darkness is an extension of their abode. Though the art of the ninja is that of deception and subterfuge, only Ninja Masters are honored as the strongest of ninja and follow their own path of rectitude that is forged by their own fists.

Having sought further power to seek the most expedient methods of death onto their targets, the Nightblade is an assassin who has mastered the art of murder. With the ways of the ninja not being enough to satiate the goal of stealing lives, the Nightblade turns to deft methods of concealed weapons, the use of poisons, the purpose of maiming and injury to debilitate and weaken, and even striking the opponent psychologically to turn their fears and imagination against them from afar, before closing in on the kill. Though the Nightblade has turned away from the path of ninja, they keep with them their study of ninjutsu to perform obscured spells that not even ninja know about.

Below is a list of skill attacks Hawkeye learns across his different classes:

Hawkeye is second in the group for having a wide variety of spells and skills at his command, where nearly all of his penultimate classes fill up the Item Ring to its maximum of 10.

As he progresses in his Light paths, the Ranger will give Hawkeye its associated specialties, being traps and nature based magic granted by Dryad and Luna. As he makes his way to his final classes, the Nomad delves more into nature based support magics, allowing him access to spells benefic and malign to statuses, like invisibility and HP boosts to poison and HP reduction, where the Rogue will delve more into offensive based traps and weapon abilities with their own unique effects.

In his Dark paths, the Ninja will grant Hawk offensive ninjutsu fare, from shurikens to elemental jutsu spells allowing both attack and debilitating stat reductions, giving him more of an edge in battle. Making his way to the penultimate Dark classes, the Nightblade will further expand upon its deadliness, making way for underhanded techniques and assassin fare through lethal weapon skills and darker jutsu, where the Ninja Master will further refine upon the Ninja's initial set of magic, allowing them to be used against many.

Below is a table of spells Hawkeye learns across his different classes:

Hawkeye wields a variety of knives, be it from daggers to even double bladed sets that join at the pommel, akin to thief swords as found in other future Square titles. Later knives as Hawkeye progresses in classes include utilitarian and multi purpose knives as a Ranger, focusing on its nature and foresting theme, while Ninja classes come to bear exotic and class exclusive codenamed knives forged to help them train and fully utilize their secretive ways of Ninjutsu.

Official artwork of Hawkeye in his Wanderer class.

Official artwork of Hawkeye in his Nightblade class.

A scene featuring Hawkeye struggling in a vicious battle, as he stands over the body of a badly injured Eagle.

Hawkeye and Riesz in Rise of Mana.

Render of Hawkeye in his inital class from the remake

Render of Hawkeye in his Ranger class from the remake

Render of Hawkeye in his Ranger class from the remake

Render of Hawkeye in his Ninja class from the remake

Render of Hawkeye in his Ninja class from the remake

Render of Hawkeye in his Nomad class from the remake

Render of Hawkeye in his Rogue class from the remake

Render of Hawkeye in his Ninja Master class from the remake

Render of Hawkeye in his Nightblade class from the remake

Key Artwork for Hawkeye and Riesz's storyline for the remake

Retrieved from "https://mana.fandom.com/wiki/Hawkeye?oldid=20822"
Community content is available under CC-BY-SA unless otherwise noted.