Riki Kitazawa, Tomokazu Sugita (JP) (Trials of Mana Remake)
v · e · d
Goremand (死を喰らう男, shi wo kurau otoko?) (Deathjester in the fan translation) is a secondary antagonist in Trials of Mana. In Trials of Mana, he's the right-hand of the Masked Mage and the arch-enemy of both Kevin and Charlotte.

Goremand's name is a portmanteau of "gore" and "gourmand," adding to his motif as a villain who eats the souls of his victims.

Goremand is the reason why Kevin and Charlotte's adventures began in Trials of Mana; however, each is motivated by Goremand's actions against someone they hold dear. For Kevin, it was turning Karl the Wolf against him with dark magic, thus resulting in Karl's death. But, the Goremand tells Kevin that reviving Karl is indeed possible, thus telling him to go to Wendel to see the Priest of Light. This is what begins Kevin's adventure. For Charlotte, after escaping from Wendel, she begins to go find Heath. Heath takes the Black Curse spell that Goremand tried to cast at Charlotte; when Heath is rendered unconscious, Goremand steps in and kidnaps him, easily shoving Charlotte aside.

Goremand knows powerful dark magic and is the servant of the Masked Mage, the final boss of Kevin and Charlotte's storyline. It was never detailed when he became the fallen mage's servant but he makes no secret as to why. Goremand devours souls and is always hungry, the Masked Mage's plan to kill everyone and make a kingdom of death would mean Goremand would be able to devour the souls of the entire planet.

Goremand's job was to unleash the power of the Mana Stones in order to open the portal to the Mana Sanctuary and break into it (so they could get the Mana Sword and unleash the Benevodons). Like his counterparts in the Crimson Wizard and Belladonna, Goremand attempted to use a kingdom to accomplish that; in his case Ferolia. Unlike his counterparts, however, his success in this was somewhat mixed. It was clear from the start Ferolia's king, Gauser had no trust in him and kept him at arm's length. What developed was a relationship of them using each other for their own goals. Nevertheless, thanks to Ferolia he was able to gain access to the Sanctuary. After kidnapping Faerie and gaining the Mana Sword, Goremand and Gauser parted ways, having no more use for each other.

Goremand is seen one last time at the entrance to the Mirage Palace in Pedda. He had been invisible and wanted to ambush Kevin/Charlotte's party, but the mirror they obtained revealed his illusion. He then battled them attempting to eat their souls, but was defeated and killed. However his voice was heard even after he was destroyed, saying they would meet again.

In the original game's combat, Goremand is a very fearsome foe in the art of magic, particularly with the elements of Earth, Wind, Water, and Fire. Worse yet, he has the ability to make two copies of himself that can attack while only he suffers damage (confusing the player into wasting attacks by attacking the clones).

In the remake, Goremand can summon more clones but they can be destroyed. In addition to his large amount of magic, he has the ability to take the soul out of one of the three players and eat it. This renders the player immobile until the other two characters attack him enough times to make him spit it out.

Goremand is a Mavole in the employ of Dark Lord. He first appears in Devius's Manor, eating the soul of Dark Lord's brother Devius after Devius failed to kill the player character.

Duke and Elena encounter Goremand again alongside Isabella and Dark Lord on the roof of Dark Lord's mansion. Dark Lord fights the heroes, ordering his minions not to interfere.

Dark Lord loses and is mortally wounded. Goremand, now loyal to Julius, eats Dark Lord's soul and demands the Mana Pendant from Isabella. Isabella, who hates Goremand, refuses and tries to kill him. The outcome of the battle was not shown, and while it was later revealed that both of them had survived, Goremand successfully steals the pendant from Isabella and gave it to Julius.

Goremand later helps the heroes by giving them clues on how to enter the Ruined Passage after self-declaring that he is now on their side much to the player character's disbelief and disgust. He then takes his leave.

Goremand's sprite from Trials of Mana

Goremand's artwork from Rise of Mana 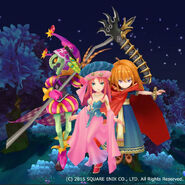 Goremand, Belladonna and Crimson Wizard in Rise of Mana

3D Render of Goremand from the Trials of Mana remake
Add a photo to this gallery
Retrieved from "https://mana.fandom.com/wiki/Goremand?oldid=30852"
Community content is available under CC-BY-SA unless otherwise noted.