Wiki of Mana
Register
Don't have an account?
Sign In
Advertisement
in: Characters, Trials of Mana, Mana Spirits, Gnome
English

Kazuhiko Inoue
Unknown (SOM; Non-canon)
v · e · d
Gnome (ノーム Nōmu) is the Mana Spirit of Earth. He appears as a humanoid creature with a large beard, resembling real-life garden gnomes. His powers are of an earthly persuasion, with such attacks as gem missiles, land mines, rock slides, earthquakes, and weapon enchantments that can petrify opponents. Gnome's powers also extend to temporarily raising defense or lowering speed. His Speed Up spell in Secret of Mana was given to Jinn (Sylphid) in the sequel, who also received a Defense Down spell, creating a "true" opposition for both modifiers

Gnome often lives in places below the ground and is associated with dwarves. Despite looking wise and experienced, his looks tend to deceive his traits. He is jolly and occasionally fools around. 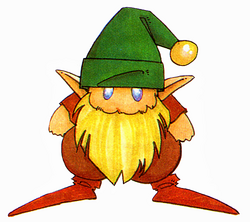 Gnome is found in the Underground Palace. When he meets the party, he refuses to let them pass into the sanctuary. Popoi attacks Gnome in protest until the Fire Gigas intervenes. Once the Fire Gigas is defeated, Gnome thanks the party for saving him and bestows his magic. His spells include Stone Saber, Speed Up, and Defender for Primm, and Gem Missile, Slow Down, and Earth Slide for Popoi. 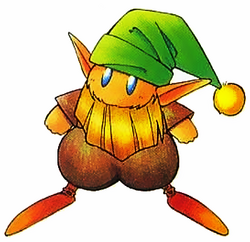 Gnome is the patron spirit of the Dwarves and is found in the Dwarf Tunnels. He is the second Mana Spirit to join the heroes. As the heroes follow Watts through the tunnels in hopes of getting some nitromyte, they come to a cavern where they are attacked by the Jewel Eater. After defeating the monster, Gnome appears and thanks the heroes for freeing him. He then joins the heroes on their quest. Much like the dwarves, Gnome uses heavy Southern American English in his localized dialogue. 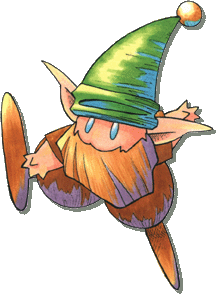 In the world of Fa'Diel, Gnome is regarded as the Spirit of Land, being the earth's guardian and protector. 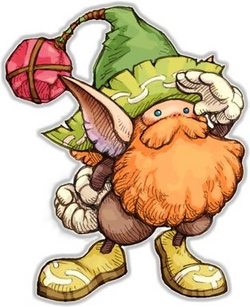 "Keep your feet on the ground."
—Gnome

Like his fellow spirits, Gnome can accompany the player character on their treks through Fa'Diel's myriad dungeons. His attack and support spells, respectively, are as follows: 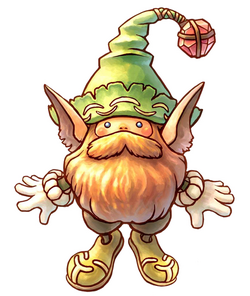 His spells are Earthquake (for Yurcheal), Diamond Shards (for D'Kelli, Belgar and Valda) and Stone Saber (for everyone else).

In Dawn of Mana, Gnome is the primary narrator. He has a Scottish accent and seems to be oldest of the spirits gathered at the meeting. His elemental power causes enemies to be magnetized to each other.