Geshtar (ゲシュタール Geshutāru) is one of the antagonists in Secret of Mana. He is the green coloured general of Emperor Vandole, and the second most recurring of them, after Thanatos.

Geshtar is a powerful warrior who fights clad in an armour, riding dangerous Mechas full of futuristic weapons like missiles. He always fights the party as the Mech Rider, rather than using the powers of Mavolia to turn into a monster.

While a prideful, haughty, violent, ruthless and relentless warrior who never hesitates to slaughter innocents and take hostages, Geshtar is notable for being the least evil of Vandole's generals (comparatively). He is genuinely courteous to and appreciative of the heroes, so long as he does not see them as threats, and even after that, grudgingly acknowledges their worth (though the remake makes him sound more hateful and unhinged). He proves quite honourable, given that he respects his parts of bargains, and is fiercely loyal to his liege. However, he is vindictive and vengeful, and strives to get back at the heroes after they best him, believing he failed his duties and tainted his pride by losing to them.

Randi, Primm and Popoi first meet Geshtar after returning the stolen Mana Seed of Water to the Water Palace. He took advantage of the breach of Undine's magic to storm the temple with his soldiers and monsters, holding Luka hostage to force the heroes to let him break the seal on the Water Seed in exchange for her life. If the party tries to fight him, he swats them aside. If they comply, he frees Luka but sets his monster pet, the dangerous Jabberwocky, loose against them.

He is next seen when he invades the Republic's sandship in Kakkara Desert. He fights the party donning his first Mech Armour, only to be defeated and forced to escape.

After the party confronts the Emperor in the Imperial Castle, Geshtar angrily pleads his lord for a second chance and confronts them on the rooftop in an upgraded Mech Armour, but is defeated again and seemingly mortally wounded. Incensed, he sets the castle on fire to take the party down with him, and they only survive thanks to King Truffle arriving on time to save them with Flammie.

After Thanatos and Fanha kill the Emperor and unseal the Mana Fortress, the party destroy Fanha's monstrous alter-ego Hexas, but Thanatos forces them to fight Geshtar, whom he turned into an undead Mech Rider. The heroes destroy him for good, putting him out of his misery.

Geshtar's sprite from the game 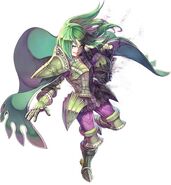 Artwork of Geshtar from the remake

Artwork of the Emperor, his generals and their demonic forms from the remake
Add a photo to this gallery
Retrieved from "https://mana.fandom.com/wiki/Geshtar?oldid=26940"
Community content is available under CC-BY-SA unless otherwise noted.