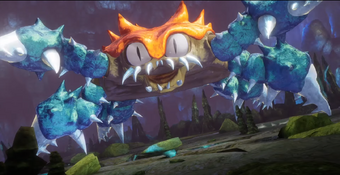 Fullmetal Hugger is a boss in Trials of Mana. It is a mutant arachnoid that holds a ward over Lumina, the Mana Spirit of the Light element, in Cascade Cavern.

The Hugger mostly uses its size to its advantage, giving the party little room to maneuver away from its physical attacks, including a Bubble Shot that may poison its target. It also has access to several light-aspected spells and an Eye Beam that deals good damage for this point in the story. Since the party will not have magic for this fight, the player's best bet is to stock up on sweets and have a Cup of Wishes on hand. The 3D version makes the beast's ground-stomp attack easier to spot; the player can use this to dodge out of harm's way. Take control of the party's most physical fighter and have him/her land strong blows to the eyes, its weak point.

Retrieved from "https://mana.fandom.com/wiki/Fullmetal_Hugger?oldid=25463"
Community content is available under CC-BY-SA unless otherwise noted.