Wiki of Mana
Register
Don't have an account?
Sign In
Advertisement
in: Article stubs, Characters, Sword of Mana Player Characters,
and 5 more

Fuji (also known as the Girl, Heroine, or Helena in printed adaptations and in Circle of Mana) is a partner character in Final Fantasy Adventure and one of the two central co-protagonists in its two remakes, Sword of Mana and Adventures of Mana.

In Adventures of Mana, Fuji has blue eyes and long wavy blonde hair with flowers and a white dress with a gradient of pink with a white mantle and a pink belt and a blue belt. Her feet has sandals and her wrists has flower bands. Around her neck is a pendant with a red gem.

In Sword of Mana, Helena has long curly brunette hair tied into a ponytail with a turquoise and pink hair band. She wears a sleeves turquoise dress with pink ruffles and her hands has turquoise gloves and her feet has turquoise boots.

Fuji possesses a kind and caring personality. She deeply cares for others like Sumo and her mother. She deeply show feelings for Sumo and is kind to everyone in the world.

Fuji is being escorted to Wendel to be protected from Dark Lord, who is seeking her and her Pendant of Mana to gain access to the Tree of Mana. They are attacked by monsters outside of Topple, and her escort, Hasim, is fatally wounded. In his last words Hasim tells Sumo to take Fuji to Wendel and find the old Gemma Knight Bogard's shack. Sumo tells Fuji that he's also looking for Bogard, and suggests they travel together. Bogard lives as a hermit in the mountains, recognizes Fuji's pendant, and tells them to find Cibba in Wendel.

On their way to Wendel, the two stop for the night in Kett Manor. Fuji gives Sumo her Magic Book of Cure before they fall asleep, but is captured by the house's master, the vampire Mr. Lee. In the Japanese version, Mr. Lee kidnapped Fuji because he wanted a virgin's blood.

Once Sumo rescues Fuji, they continue to Wendel. They meet Cibba, who summons the spirit of Fuji's mother, who tells her she is of the Mana Family, who created the tree and whom the Gemma Knights protect. Fuji is captured by a disguised Julius as his army attacks Wendel. Sumo boards Glaive's Airship, and when he can't free her from the inside, he tries to break her out from the outside. Julius catches them, and Sumo is only able to get the pendant before he is knocked off the airship. As the ship takes Fuji to Glaive Castle, Amanda steals the pendant from Sumo and gives it to Davias in Jadd (Adventures of Mana) to try and buy her brother's freedom. Davias gives the pendant to Julius' bird Garuda to take to Glaive Castle.

Once Sumo makes it back to Glaive Castle, he finds Fuji there. As he confronts Dark Lord, he recovers a fake pendant. Julius, who has the real pendant, bewitches Fuji into chanting the spell to let them ride up the waterfall to the entrance of the Temple of Mana.

By the time Sumo reaches the temple, Julius has gained the power of Mana. His defeat at the hands of Sumo destroys the Tree of Mana. The spirit of Fuji's Mother tells her she must now become the new and last tree, leaving Sumo with the lifelong task of guarding the tree as the last of the Gemma Knights.

The Heroine is a member of the Mana Clan, a tribe said to be descendants of the Mana Goddess herself. Raised in the Mana Village by her mother, Elise, she had a happy childhood, listening to legends passed down the Mana line for generations and playing with her friend Willy. One day, the Heroine was preparing for a journey around the world alongside Bogard, one of the legendary Gemma Knights who had put an end to Emperor Vandole and his evil empire ten years before. However, this day would take a dark turn when a knight known as "Dark Lord" came to the village and, declaring the Clan to be Mana-hoarding "heretics" who must be eliminated, had the village razed. The Heroine fled with Elise who, after tripping over a branch, admitted to her that she wasn't her true mother before teleporting her and Bogard, one of the three Gemma Knights who witnessed the massacre, away using magic.

The two appeared in Granz Realm where they were found by Consul Hermann, a friend of Bogard's who, at his urging, sheltered the Heroine at his home. However, Dark Lord and his Heretic Hunters tracked her down and she was again forced to flee, this time alongside Hermann's son, though they were soon separated. The Heroine was found again by Bogard, and began travelling with him as planned, now the sole remaining member of the Mana Clan.

Fuji possesses no fighting prowess, and she won't attack enemies. However, she will, when asked, slowly regenerate Sumo's HP through magic.

In Sword of Mana, When playing through the Hero's storyline , the Heroine joins him as a partner character. In battle, she comes equipped with a Staff and Wisp magic. She joins six times throughout the game:Firstly on the outskirts of Topple after accepting Hero's help in finding a child's lost book, leaving when they reach the village proper.

In Adventure of Mana, She doesn’t attack enemies. She heals the hero with health regeneration. 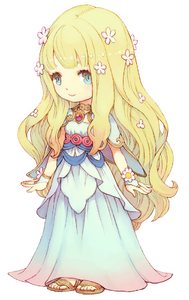 Fuji from Adventure of Mana 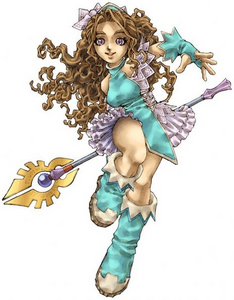 Helena from Sword of Mana 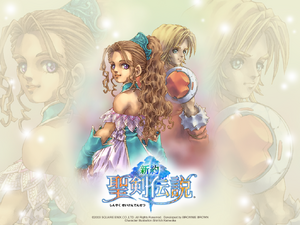