This article is about the 1991 release. For the current version, see Adventures of Mana.

Single-player
Final Fantasy Adventure (Mystic Quest in Europe, and Seiken Densetsu: Final Fantasy Gaiden or "Legend of the Holy Sword: Final Fantasy Gaiden" in Japan) is a spin-off title from Square's (now Square Enix) Final Fantasy series released for Nintendo's Game Boy handheld console. Despite being marketed and named as a Final Fantasy title, its Zelda-like action-adventure gameplay set it apart from its parent series. It would go on to become the first entry in the Mana series.

It has received two remakes since its initial release: Sword of Mana on the Game Boy Advance, which changed many aspects of the plot and gameplay; and Adventures of Mana on iOS, Android and PlayStation Vita, which was more faithful to its source material, though featured improved graphics and music.

The gameplay is similar to the original The Legend of Zelda for the NES: the world is viewed from a top-down camera angle, it is divided up into many different squares that can fit on the screen, and the main character can move up, down, left, and right across the screen. The player can interact with individuals within towns by gathering information and buying or selling items and equipment. A variety of enemies can be battled on a field screen to gain experience, GP, and items. Within dungeon areas, a number of puzzles may be present and required to be solved in order for the player to advance. The player can also save at any point. A number of weapons can be found throughout the game to maneuver through obstacles such as cutting through trees and thorns.

The main character possesses several statistics, including hit points, power, and stamina, which can all increase upon gaining an experience level. Magic spells, which expend the character's MP, can be used to heal oneself or damage enemies. These spells can only be found in certain locations or obtained from other characters at specific plot intervals. In addition, the protagonist has a power gauge that affects his attack strength—the higher the gauge, the stronger his attack will be. The speed at which it fills is directly affected by the character's will level. The gauge will slowly fill up over time, but once the main character attacks, the gauge is emptied. When the gauge is completely filled up and the main character attacks with a weapon, he will perform a special attack. 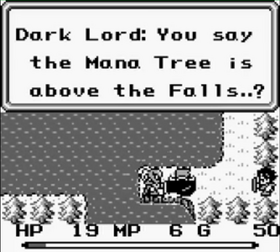 The Hero (named by the player, officially called Sumo) is a prisoner of the Dark Lord. One day, the Hero's friend informs him of the Dark Lord's goals, and he urges him to seek a Knight named Bogard. As the Hero escapes imprisonment, he learns that the Dark Lord is seeking a key to the Mana Sanctuary in order to control the Mana Tree, an energy source that sustains life. The Hero is befriended by the Heroine (named by the player, officially called Fuji) who is also seeking Bogard. The two find Bogard, who recommends they seek out a man named Cibba. During their journey to meet him, the Heroine is kidnapped. With the aid of a mysterious man, she is later rescued by the Hero. When they meet Cibba, he plays a message left by the Heroine's mother, who reveals she is a descendant of the guardians of the Mana Tree and her pendant is the key to it. The mysterious man, upon discovering that the heroine holds the pendant, reveals himself to be Julius, the Dark Lord's advisor and kidnaps her. The Hero then attempts to rescue the Heroine, but he fails and is knocked off of Julius's airship. However, the Heroine gives the Hero the pendant just before he falls. 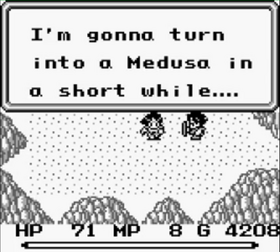 The Hero is then reunited with Amanda, an escapee from his prison, who steals the pendant in order to win her brother Lester's freedom. The mayor of Jadd, Davias, takes the pendant, but he transforms Lester into a parrot. The Hero and Amanda confront a Medusa for its tear, which will break the spell. They kill it, but Amanda is infected by the Medusa's attack, causing her to transform into one herself. The Hero reluctantly kills her, and uses her tears to break Lester's spell. Lester avenges Amanda's death by killing Davias, who reveals that he gave the pendant to the Dark Lord. The Hero confronts and defeats the Dark Lord; however, Hero discovers that the Heroine is under Julius' mind control and has opened the entrance to the Mana Tree. Julius reveals he is the last survivor of the Vandole Empire, the empire who attempted to control the Mana Tree years ago, and handily defeats the Hero. 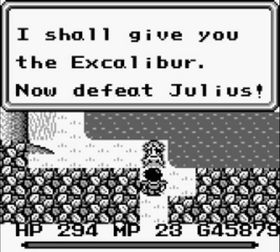 Realizing he is powerless to defeat Julius, the Hero learns from Cibba about a powerful sword called Excalibur. Cibba helps him find the Excalibur only to find a rusty sword instead. He explains that the rusty sword is the Excalibur and would reveal its true strength to whoever it finds worthy. The Hero then raises Dime Tower to reach the Mana Sanctuary and meets a robot known as Marcie. After reaching the top, the tower begins to collapse and Marcie sacrifices himself by throwing the Hero across. After obtaining and passing the sword's trials, the Hero confronts and defeats Julius at the cost of the Mana Tree's life. The Heroine's mother reveals she is the current Mana Tree and before dying, asks the Heroine to succeed her position. The Heroine agrees and bids farewell to the Hero as she becomes the next Mana Tree, and the Hero her guardian. 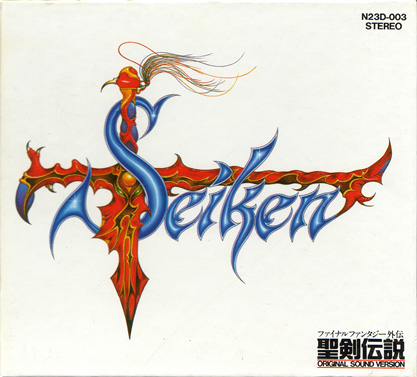 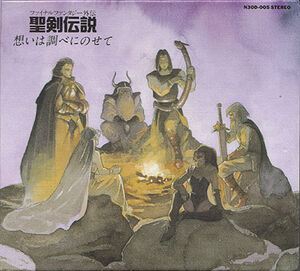 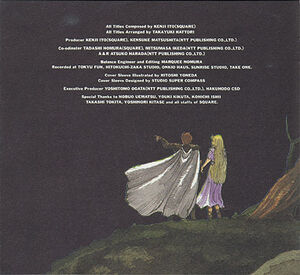 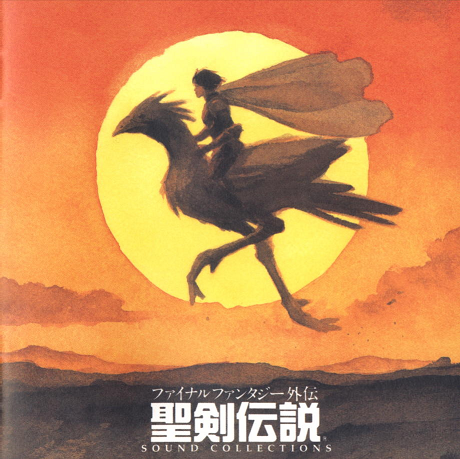