For the supporting character, see Phanna.

Fanha (ファウナッハ Faunahha) is an antagonist in Secret of Mana. She is a general under Emperor Vandole and the only female among their ranks.

Fanha confronts the party when they enter the Tree Palace, but is ordered to stand down while Sheex deals with them and leaves with the Emperor to find the Mana Fortress. After the party kills Aegagropilon, they break the seal on the Mana Seeds, raising the sunken Lost Continent and unsealing the Grand Palace.

Fanha confronts the party again and attempts to avenge Geshtar and Sheex, only for the Emperor to intervene telling her the Empire has no time to waste on children. He orders her and the soldier accompanying them to press on and heads off with the soldier while Fanha follows him.

When the party meets Fanha again, after discovering Emperor Vandole's corpse, she admits to killing him and working for Thanatos, who reveals himself as the real mastermind of the plot to claim the Fortress and take over Fa'Diel. They were in fact manipulating Vandole from the start and using him as a smokescreen.

Fahna then uses the power of Mavolia to transform into her true form Hexas and does battle with the party. In spite of her demonic alter-ego's immense magic power, she meets her demise by their hand in her turn asking Thanatos how she died in disbelief (even saying the words "This cannot be" in the remake).

Fanha's sprite from the game
Add a photo to this gallery 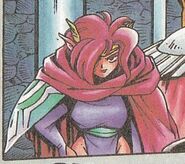 Artwork of Fanha from the remake 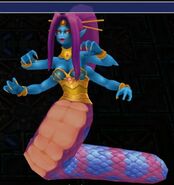 Artwork of the Emperor, his generals and their demonic forms from the remake
Add a photo to this gallery
Retrieved from "https://mana.fandom.com/wiki/Fanha?oldid=20788"
Community content is available under CC-BY-SA unless otherwise noted.