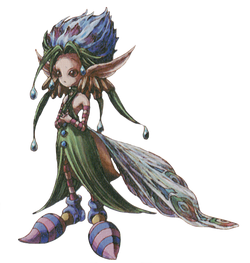 Official artwork of a Faerie from Legend of Mana.

Faeries (妖精 Yousei) form a race of magical beings that take the form of female sprites in Legend of Mana. Symbiotically connected with nature, Faeries possess the power to amplify the power of Mana released by plants through song and dance, which they then in turn harness to make the world of Fa'Diel a better place to live in. Owing to the actions of Anise's mages in the holy war of time immemorial, Faeries are, in the events of Legend of Mana, known to nurse an irate disdain for the human race.

As a result of the human involvement in the holy war of time immemorial, the Faeries rightfully nurse a bitter antipathy for the human race, one that they do not hesitate to bluntly display when the opportunity arises. The Faeries flitting about both Lake Kilma and the Jungle's premises best illustrate this fact, where approaching any of them will yield declarative responses that are infused with a brand of hatred that has been left to fester for eons. Their actions in The Gorgon's Eye further depict the seething hatred that they harbour for humans, as they mercilessly petrify the anthropomorphic Pirate Penguins and their captain under the charge of trespass, without giving them any chance to explain their case.

Despite the long-standing hatred that distances the Faeries from the humans, it is evident that they still harbour a deep curiosity for the race's vagaries; their involvement in The Nordic Snowfield best portrays this, as they organise an elaborate game with the Hero/Heroine to test the limits of the human determination under the allure of attaining treasure.

Retrieved from "https://mana.fandom.com/wiki/Faeries_(Legend_of_Mana)?oldid=12789"
Community content is available under CC-BY-SA unless otherwise noted.