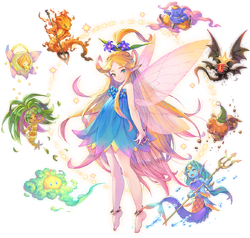 The Faerie is a character that appears in Trials of Mana.

The Faerie is one of several of her kind that lived peacefully in the Mana Sanctuary until the world's Mana began fading. The faeries quickly set out from the Sanctuary to restore the balance with the assistance of the Priest of Light and the chosen hero of Mana. Because of the fading Mana, however, only Faerie survived the journey, and she only made it as far as Astoria before collapsing. Fortunately, she was found by the game's main protagonist who had followed her into the Rabite Forest. Unable to travel any farther on her own, Faerie chose to use the protagonist as a host, which also marked the protagonist as the one destined to wield the Sword of Mana and restore balance to the world. She then urged the protagonist to take her to the Priest of Light in the Holy City Wendel.

In the game, Faerie acts as a sort of ninth Mana Spirit; she does not grant the heroes any spells, but she can use her powers to aid them in certain situations, such as lowering the barrier that prevented the heroes from reaching Wendel. She also serves as an advisor at times, telling the heroes where they should go next or explaining the situation to them.

Once the heroes manage to open a gate to the Mana Sanctuary, the three main villains immediately take the opportunity to go after the Mana Sword. Their forces eliminate each other, however, seemingly leaving the heroes free to obtain the sword for themselves. Once the main protagonist obtains the sword, however, they discover that the Faerie has been abducted by one of the villains; which villain abducts the Faerie depends on who the main protagonist is. Regardless of identity, the villain retreats to their stronghold and demands the Mana Sword in exchange for the Faerie. Having no choice but to comply, the heroes hand over the sword and watch helplessly as the villain releases the eight Benevodons.

The Faerie surrounded by the eight Mana Spirits from Trials of Mana.
Add a photo to this gallery
Retrieved from "https://mana.fandom.com/wiki/Faerie?oldid=20831"
Community content is available under CC-BY-SA unless otherwise noted.