Trials of Mana
Heroes of Mana

Evil Gate is one of three spells taught by Shade, the Mana Spirit of Darkness. It is an offensive spell that conjures a vortex of dark energy, inflicting dark elemental damage based on the target's current and maximum HP. It is ineffective against bosses.

Popoi can cast the spell at a cost of 8 MP. It is also cast by the Lime Slime in the Palace of Darkness, Fiend Heads, and National Scars.

Evil Gate is a dark-elemental spell in Trials of Mana.

When cast upon a standalone enemy, a small portal of portent darkness will open up in close proximity to them, whereupon a vortex of fell darkness will suck them in and engulf them before dissipating.

On the other hand, when the spell is cast upon all enemies on a given battlefield, the same portal of odious darkness will similarly appear, albeit one that fills up the entirety of the immediate surroundings and ensnare all enemies. 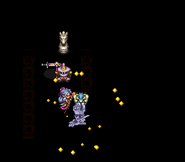 An enemy Dark Wizard casting the single version of Evil Gate on Riesz.

An enemy Gremlin casting Evil Gate on Duran, Angela and Charlotte.
Add a photo to this gallery
Retrieved from "https://mana.fandom.com/wiki/Evil_Gate?oldid=24869"
Community content is available under CC-BY-SA unless otherwise noted.