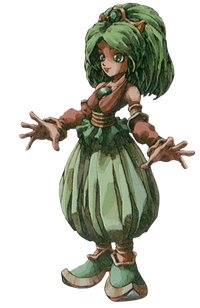 Official artwork of Esmeralda from Legend of Mana.

The Lucky Clover
Jumi of Emerald

Esmeralda (エメロード Emerōdo) is a major character from the Jumi story arc of Legend of Mana. Originally appearing in Legend of Mana as a very charming and sometimes childish student at Geo’s Academy of Magic, Esmeralda is, in fact, a member of the Jumi race, possessing a core of emerald.

Esmeralda is a guardian and the Jumi of Emerald. She was born in the Bejeweled City and lived there until Florina, the Jumi of Fluorite, disappeared, prompting Lady Blackpearl to depart in order to locate the Sword of Mana. The hunt for Jumi cores was initiated shortly thereafter. Esmeralda ran away from Etansel and went to Geo, where she was taken in by the Academy of Magic. She has three sisters, who are the Jumis of Emerald as well. She wanted to become a knight so she could protect herself and couldn't cry tears. She was looked at as a child by her sisters and was considered childish. Her sisters had their cores taken out and disappeared into Geo. She went to Geo and studied magic under Nunuzac until a knight appears. She and the Hero/Heroine went in search for her sisters' cores and found them all in different locations. She eventually died when Sandra took her core and her sisters' cores. After that, the main character could find her in Underworld walking around in her room. She's friends with Diana, Rubens, Elazul, and Hero/Heroine. She looks up to Blackpearl as an idol. Her core and her sisters' cores are known as the 'Lucky Clover'.

Esmeralda first appears doing a teleportation spell with Nunuzac as he insults her by calling her dirt. She teleports them back into the library and met Elazul and Hero/Heroine. She asks both of them if she has seen anyone who looks like her. When you say no, she cries and asks to meet her on a different day. Later, she asks Hero/Heroine a favor of becoming her knight as Elazul intervenes saying that he should be protecting since he's a Jumi Knight. She rejects him saying that he's already a knight to Pearl and that would be two-timing. When she gives her offer to the main character, they become her knight temporarily and start their search for her sisters' cores. They found their cores in a restaurant, the principal's office, and Kristie's Palace and found a note from the Jewel Hunter saying she's going to come for the Lucky Clover. Esmeralda ran off to the Academy thinking that she would be safe there until she was kidnapped by Sandra and taken to Kristie's Palace. They both ended up in the arena below as Elazul and Hero/Heroine met up and fought the Jewel Beast together. Once it's defeated, Sandra takes out Esmeralda's core and steals the other three emerald cores together.

In the Underworld, Esmeralda can be seen pacing in her room, talking about why she argued with Diana about how Sandra told her that Diana stole the Teardrop Crystal.

"Stay with me a little longer."

"No. There might be some magic left in their cores. If I had some tears of healing, I could bring them back!"

"What's that sword? If you're a knight, don't talk like a sissy!" Esmerald to Elazul.

"Well, how rare! A courteous shopkeeper! And here I thought Jewelry Shops were the same as morgues."

"You're a wonderful knight. I..always wanted to be able to say that. Thanks!"

"Why, you sure say mean things for a dove! Come on! You're my knight! Fight for me!"

"I sense that someone is thinking of me now...Thank you."

"Thank you for becoming my knight."

Retrieved from "https://mana.fandom.com/wiki/Esmeralda?oldid=18629"
Community content is available under CC-BY-SA unless otherwise noted.