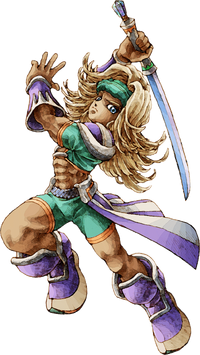 Official artwork of Escad from Legend of Mana. 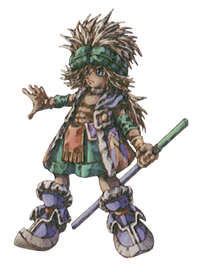 Official artwork of Escad as a youth from Legend of Mana.

Escad (エスカデ Esukade) is a major ally character from the Faerie story arc of Legend of Mana. Born into the Liotte family of Holy Knights, Escad pledges to fight for the cause of justice with an overbearing sense of righteousness.

Escad is a major character in the Fairies Quest of Legend of Mana but unlike the rest of the subplots his and Daena's roles and goals despite similar at the beginning may lead to a tragic fate that seems to be mandatory in the story of Escad, Matilda, Daena and Irwin.

Escad was a young warrior and in his youth befriended Matilda and Daena, but much to his dismay Matilda fancied Irwin, a demon, it seemed that despite the age differences Escad loved Matilda and grew bitter when Irwin planned to help her escape the temple at Gato Grottoes, he tracked them to the Ulkan Mines and although very young he caught them just as Irwin absorbed Matilda's Wisp elemental powers, Escad fought him but it is unknown how it resulted.

In present days, Escad became an acquaintance of one of the Seven Wisdoms, Rosiotti, a former hero. Escad resides in the Jungle where most fairies live and he claims something odd is happening in the world and blames Irwin for it.

After the hero/heroine finds Daena in Lake Kilma, Daena claims she doesn't know where Irwin went but it is clear that he has taken control of the Fairies, and may take Matilda to live with him in their world, much to Escad's disapproval.

The player may come in contact with Escad, and may even fight him at the Ulkan Mines if they tell him that they choose to ally with Daena, whom Escad claims is just helping a demon and doesn't deserve forgiveness.

Once the player reunites with Daena and Matilda at the Gato Grottoes, Escad arrives and refuses to let Matilda go to the Land of the Fairies with Irwin. Despite Daena's explanations, Escad fervently lunges at her for even wanting to help Irwin - a demon - then Matilda in despair teleports to the Mindas ruins where Irwin awaits.

Once Daena, Escad and the hero/heroine arrive, the player is forced to make a choice, help Escad by killing Daena, or help Daena killing Escad.

If the player helps Escad once in the Pyramid of the ruins he claims it would be a miracle if Daena were still alive, and that if Matilda wishes to hate him he will accept it. Afterwards, Matilda explains to him and the player that Irwin is summoning the corpse of an ancient Dragon named Lucemia to revive it and destroy the world. Escad leaves soon after that, disappointed at Matilda, even after she asked him to stay since it may be their last chance.

Then again, depending on how the players actions are taken, Escad may die at Lucemia or join him/her in the fight against Irwin. If Escad is not recruited and the hero/heroine finds Irwin at Lucemia Escad will be hit and ask the player to be strong and fight to be a hero before being incinerated by Irwin. However, if Escad comes with the player he will help in the fight. After the events when the nuns reveal the death of Matilda, he will remain silent without much interest in the matter.

Escad is a character who is, as a result of having been blinded by the prejudice that he has been conditioned to harbour towards the demon race, portrayed as one who is foolishly impetuous, reckless and hot-headed, completely incapable of rational thought. This hatred that he nurses towards the demon race is one that is evidently cultivated from a young age, presumably by the society that he is directly exposed to; his declarations in the beginning of the Pokiehl: Dream Teller proves as much, where, as a juvenile, proclaims that demons are beings that are evil through and through, and whom will bring the world to catastrophe if left unchecked.

Further funneling the particular hatred that he directs towards the demi-human Irwin is an acrimonious jealousy, one that takes its roots from Matilda preferring the company of Irwin over his, in spite of the love that attracts him to her. His actions both in the past and the present hint very strongly at this; during the Ulkan Mines incident, his decision to trail after Irwin and Matilda is not just motivated by his prejudiced hatred towards Irwin, but also his jealous indignation towards Matilda for having chosen Irwin over him; during the main events of Legend of Mana, he is prone to quick outbursts of rage when he attempts, but fails, to force Matilda to view Irwin in an antagonistic light.

This hatred of Escad's could potentially lead to his eventual downfall in the Tower of Wind in the Mindas Ruins, should the Hero/Heroine choose to side with Daena over him.

*Quality of metal is dependent on how much progress has been made in the game.

Retrieved from "https://mana.fandom.com/wiki/Escad?oldid=18628"
Community content is available under CC-BY-SA unless otherwise noted.