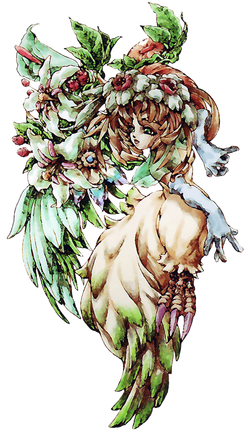 Official artwork of Elle from Legend of Mana.

Elle (エレ Ere) is a character from Legend of Mana. 21 years of age, Elle is a beautiful siren with an equally beautiful singing voice to match. Taking up residence within the confines of the Birdcage Lighthouse located in Madora Beach, Elle is part of the sisterhood of friends that include Monique and Flameshe.

While placidly flying around and singing near Polpota Harbor, Elle accidentally sunk a ship that was approaching its docks with her song. Her song seemed to emanate a powerful sound magic that caused a negative reaction to ships with its sound waves. Elle had never known a siren's song causes damage to ships (since they were only recently invented), and she was stricken with guilt after the accident. After these events, she became depressed and vowed to never sing again. Unbeknownst to her, the ship she sunk was, in actuality, a warship carrying an entire battalion of mindcontrolled soldiers who work for The Deathbringer. The warship was actually going to invade Polpota Harbor "by force if necessary" in search of some type of "ultimate weapon". The ultimate weapon was Flameshe's "Flame" power. Elle's actions had actually saved the small town from being invaded and saved the life of her friend Flameshe in the process, who usually hangs out at the Polpota Harbor docks.

The remaining survivors of The Deathbringer's soldiers, led by Thoma, sent out an aggressive search party to capture and kill any siren they found. Elle was captured and trapped in the Birdcage Lighthouse at the Madora Beach. The soldiers had constructed a cruel prison by putting a ferocious plant monster at the exit of the cage, so she could not eat or escape. The soldiers coldly stated that they would let her "wither and die" and they would in turn become an enemy to all sirens. Elle accepted this fate and went into a deep depression, awaiting her own death. She also became agoraphobic during this time and was afraid to ever leave her cage again, fearing that she may sink more ships. It was mentioned by Gilbert that a siren's wings would wither and die if they do not sing, this may also be hinting that it includes their own life. Thankfully, Elle started singing again after all of the events of the story concluded.

While investigating a haunting at Polpota Harbor, the Hero/Heroine discovered the news of the sunken ship which was caused by a "sea hag". The Hero bumped into Monique who happened to be in Polpota Harbor visiting Elle. Monique was aggressively captured by the evil soldiers mind controlled by Deathbringer, right in front of the Hero's eyes. She claimed her innocence but she was ignored by the siren hating soldiers. A second group of soldiers then arrived and reported that another siren was captured. Monique was released upon hearing of this news. The Hero/Heroine and Monique eventually found out that the captured siren was Elle, who was possibly the cause of sinking the warship as she flew by singing near it.

After heading to Polpota Harbor, the Hero/Heroine discovered the Birdcage Lighthouse where Elle was kept prisoner. A Boink which acted as a teleportation device was planted by the evil soldiers at the beach, to send anyone away who comes near to the Lighthouse, and to prevent Elle from being rescued. The Hero arrived at the Lighthouse to discover Monique and Flameshe talking to Elle. They tried to convince her not to give up and stop singing. Her friends explain to Elle that her nature is to sing, and that the existence of ships that are affected by her singing is not her fault. Elle disagrees and vows again to never sing so that she would never hurt anyone again. Monique asked the Hero to rescue Elle from the plant monster, but Flameshe adamantly refuses the Hero's involvement. By hiding near the exit by the rocks, the Hero/Heroine tricked into letting her guard down. Being a mermaid, she needs to frequently teleport into the water and replenish her oxygen. Once the Hero was out of view she formed a bubble and teleported away thinking he left. She disappeared for a brief moment and the Hero snuck past Flameshe. The Hero/Heroine then encountered the plant monster and defeated it, thus freeing Elle from her captivity.

Once Elle is rescued from imprisonment, the Hero may take Elle as a companion until the end of the game. She decides to go on an adventure to see the world and is always happy to go outside with the Hero on quests together. There are few quests for Elle and they usually involve Gilbert, the troubadour centaur. The Hero/Heroine may introduce Elle to him at Polpota Harbor.

Upon the completion of the quests, Elle once again sings thanks to the "help" of Gilbert and Cap'n Tusk. Gilbert's intentions were purely selfish in his "quest for love" and he kidnapped Elle in order to attempt to force to her sing on a pirate ship, the SS Buccaneer. Upon arriving at the pirate ship the Hero sees that the penguin pirates have captured Gilbert and Elle. The pirates were going to sell Elle and Gilbert as slaves for their musical talents. In order to scare the pirates, Elle started to sing, thus (possibly) causing great damage to the ship. A giant orc then invades the ship and the Hero defeats it. Elle apologized to Cap'n Tusk for singing and damaging his ship and he quickly forgave her. Cap N' Tusk then boasted that no song could destroy his ship perfect ship and he convinced Elle to sing again to prove her wrong. Elle sang her Flower song once again and the ship received a large amount of damage, but it did not sink.

Elle possibly felt more comfortable about singing after these events, since she witnessed that if built correctly, a ship could withstand the singing of a siren. Upon picking her up at the Birdcage Lighthouse the Hero/Heroine can hear Elle singing, so it is believed that she was able to cope with her "sin", as she calls it. Her friends Monique and Flameshe also reassured her that she is not bad or evil by nature, and that she should live freely and sing. Upon meeting Gaeus in Luon Highway, Elle was told to open her heart to her true feelings and not to dwell on the past. He also advised that she could change the future or the past, if she so wished to, which means she must alter her perception of the past. Flameshe hints that Elle's singing reveals hidden evils. The Orc that attacked the Pirate Ship appeared while she was singing and the ship she sunk was full of minions sent by The Deathbringer that were sent to capture and kill Flameshe, in order to acquire her sacred "Flame" power. In reality, Elle's singing saved the Pirate Ship and Flameshe (unknowing to her, but Gaeaus knew). If she had not sang the Orc would not have showed itself and would have destroyed the Pirate Ship after the Hero left. Elle kindly thanked Gaeus for his advice and departed with the Hero. She left as a changed person that focused on protecting the world and building a great future for all. After the conclusion of the Gilbert "love" quests, Monique eventually moves in with Elle at the Birdcage Lighthouse, to avoid more heartbreak from dealing with Gilbert's fickle personality. After Monique's arrival, Elle showed a much more cheerful personality when joining the Hero's party.

In stark contrast to her beauteous countenance and powerful, melodious vocals is an individual who is feeble and vulnerable, wholly lacking in self-confidence. This much can be gleaned in The Siren's Song, where, upon being captured and accused of sinking the ship of the imperial army, Elle proves to be rather tractable in her ready submission to the allegations, allowing the troops to imprison her in the Birdcage Lighthouse.

Elle does receive quite a significant boost to her self-confidence upon Tropicallo's defeat in The Siren's Song, as Monique successfully convinces her to liberate herself from her self-condemnation and remain true to her birthright through song. This in turn spurs her to make the bold decision to accompany the Hero/Heroine on their adventures when invited.

Elle has also proven to be rather devoted to those whom she regards as her dear friends; in Gilbert: Resume for Love, in spite of the fact that Gilbert has attempted to kidnap her in Gilbert: Love is Blind, Elle still attempts to convince Flameshe to provide assistance to him nevertheless, in light of Monique's distress over his petrification.

*Quality of metal is dependent on how much progress has been made in the game.

Elle is the most difficult companion to recruit in Legend of Mana. Many players never discover Elle's existence because the prerequisite quests to obtain her are quite intricate.

In order to recruit Elle, you must complete the quest "A Siren's Song," which is a difficult quest to unlock. To begin it, you must first complete three other quests: "Faeries' Light" (in order to meet Monique,) "Summer Lovin'," and "Drowned Dreams." The fastest way to get through these quests, right from the start of the game, is as follows:

With this done, return to Lumina and enter Crescent Moon Alley in order to start the "A Siren's Song" quest. Upon completing this quest, you may return to the Birdcage Lighthouse at any time and talk to Elle to get her to come along with you.

Elle starts out at Level 11 (?), and uses no weapons. She uses only instruments to attack, specifically the Water Drum, Water Flute, Wind Harp, and Wind Marimba. Being the only companion with two "high powered" spells (Bud and Lisa only have one each), she is probably the most powerful caster out of all the companions. Her HP stays relatively low and she is not at all suited for close range combat, but her spell power and magical defense are unmatched. She can quickly dispatch groups of enemies with her wind songs and they also offer great knockback distance, which can be useful in a pinch. Her Water Drum can cause Freeze (though only to enemies weak to Undine magic) and her Wind Harp can cause SKL Down (only to enemies weak to Jinn magic). The Water Flute and the Wind Marimba do not cause status effects, but they are much stronger than her other two instruments to make up for it.

Elle's Synchro Effect is Elemental Shield, and it greatly raises the magical resistances of her teammates.

"Flower petals are floating in the air... The flower wanted to go somewhere and it decided to fly in the air..." (Quoted from the Siren's Song, part 2)

"I'm thinking about going outside... May I go with you?" (when speaking to her to bring her on a quest)

"How can I redeem my sin for taking people's lives?"

"Thanks. But... I don't want to. I'm such a coward." (when told by Monique that she can leave after being rescued)

"Gilbert is a weird guy, but I guess we should still help him."

"She's a kind girl, but she can be so harsh sometimes!!" (in reference to Flameshe)

"Thank you for doing me this favor. I really appreciate it!"

Retrieved from "https://mana.fandom.com/wiki/Elle?oldid=20301"
Community content is available under CC-BY-SA unless otherwise noted.