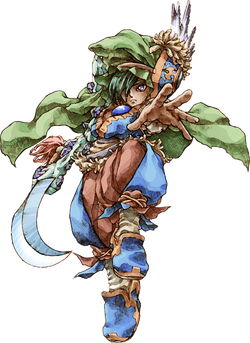 Official artwork of Elazul from Legend of Mana.

Elazul (瑠璃 Ruri, lit. Lapis Lazuli) is a major character from the Jumi story arc of Legend of Mana. With piercing blue eyes and a cape of sand, Elazul is the Jumi Knight of Pearl and possesses a core of lapis lazuli. Making a stunning impression on all who behold him, Elazul, alongside Pearl, embarks on a mission to search for fellow survivors of the nigh extinct Jumi race.

Elazul comes from "el azul," which is Spanish for "the blue one."

Elazul first meets the Hero/Heroine in Domina. He is seen harassing Rachel in the tavern, and depending on what you say to him, he will either join you then, or later when you're on the town map. He is essential to the Jumi arc, although you can choose to bring either him or Pearl along with you.

Elazul is helped by the player in many quests, most of which revolve around finding the remaining Jumi or rescuing Pearl. As the story becomes more complex Elazul and Pearl start to work together instead of one simply babysitting the other in hopes of stopping Sandra the Jewel Hunter and finding a way to save the other Jumi.

Elazul's quests revolve at finding the Jumi who are due to the Jewel Hunter hidden among the townspeople around Fa'Diel, and although they manage to earn the trust or the support of the other Jumi they also end up revealing their identities and end up becoming victims. This makes Elazul more protective of Pearl and desperate to stop Sandra and save the Jumi. After the deaths of Rubens, Esmeralda, and Diana, Elazul grows bitter and more resentful of the Jewel Hunter, and after Pearl is kidnapped by Sandra he rushes to ask for help from the Hero/Heroine instead of arguing.

Elazul's past starts to be revealed after the events in the Mekiv Caverns. When Pearl turns into Blackpearl and Sandra scratches Elazul's lapis lazuli core, he weakens greatly and recovers at the main character's house. Elazul begs for Blackpearl not to leave him, but she does so, leaving him as a broken man. However, Elazul finds strength in himself to search for his Jumi Guardian in spite of everything.

The player learns of Pearl and Elazul's past when coming in contact with the Pandora's box inside Geo's Jewel Shop. Another Jumi named Florina is sleeping here, suffering from nightmares. The player helps her in her sleep, which reveals that in the past Elazul had another unknown Guardian whom he failed to protect and Blackpearl, the Jumi leader Knight, scolded him for it before she suffered from a severe damage on her core and turned into Pearl. By this time Elazul found her and swore to protect her as her Knight.

After these events Elazul and Pearl track a jewel merchant to the abandoned shop in Geo, which was in fact a space between realities that served as the hideout for Florina, the Clarius and leader of the Jumi, inside Pandora's box. Here Florina agreed with Elazul to turn Pearl into Blackpearl to learn what happened.

Blackpearl explains it and reveals the Sword of Mana to Elazul which he asked for that power to help their dying race. After this the group heads to the City of Shining Destruction, the Bejeweled City.

Depending on the player's choices, Elazul may die at the hands of Sandra, and the final battle against the Lord of Jewels begins.

Elazul is portrayed as an individual who is impatient, quick-tempered and rash; a fact that is made immediately evident right when he is first introduced in the town of Domina, where he is abrasive and rude when confronting Rachel to gain information about Pearl's whereabouts.

While these attributes of Elazul's are ones that are not very ideal, it is through them that one can perceive that he is rather responsible in executing the duties that have been ceded upon him as a Jumi Knight - Ones that demand him to protect his Guardian Pearl at all costs. This has this led to him reacting in an agitated, irrational manner each time he perceives Pearl to be subjected to danger; in The Lost Princess, for one, Pearl separating from Elazul due to a spell of absent-mindedness causes him to be, in a spate of anxiety, unable to keep his cool when conducting investigations on her whereabouts, as he berates himself for having failed to keep vigil over her safety as her Knight; in Two Pearls, when Elazul bears witness to the torment that Pearl underwent and her true self (Blackpearl) manifests in the Tower of Leires, he unhesitatingly attempts to challenge Blackpearl, throwing no caution to the power that she wields as a more experienced Knight.

Unsurprisingly, Elazul's brash demeanor is one that in turn makes him appear anti-social and disagreeable in the eyes of the general public of Fa'Diel. This could be seen as a means of self-preservation on Elazul's part, given his situation; as a member of an endangered race that is under the threat of extinction due to the work of an enigmatic jewel hunter, he is thus naturally inclined to be distrustful of the people he encounters.

Official artwork of Elazul from Rise of Mana.
Add a photo to this gallery
Retrieved from "https://mana.fandom.com/wiki/Elazul?oldid=15342"
Community content is available under CC-BY-SA unless otherwise noted.