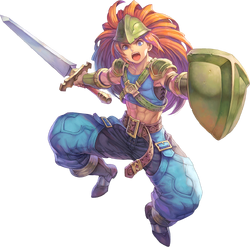 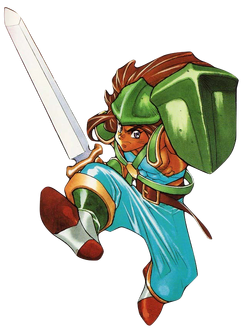 "I'm a soldier from Valsena. The name's Duran. I'm from a family of sword masters."
—3D Trailer

Duran (デュラン, Dyuran) is one of the six playable characters in Trials of Mana.

"Just you wait, Crimson Wizard! I won't stop until I'm powerful enough to take you down. I will defeat you!"
—Duran

Duran is a mercenary swordsman from the Valsena, Kingdom of Green Fields (Forcena in the fan-translation) who proudly serves the wise King Richard. Duran's father Loki, a good friend of Richard's, was lost in a battle with the Dragon Emperor when Duran was still young. Soon afterwards, Duran's mother succumbed to an illness, leaving Duran and his little sister Wendy to be raised by their aunt Stella. One night, Duran is on guard duty at the castle of Valsena when the Crimson Wizard attacks the castle. Duran fights back, but is overwhelmed by the wizard's magical abilities and is left for dead. After making his recovery, Duran vows to become the best swordsman in the world and to exact his revenge upon the Crimson Wizard. He then leaves for the Holy City Wendel to ask the Priest of Light about changing classes.

Duran shares many story elements with Angela, who comes from the Magic Kingdom of Altena which tries to invade Valsena. If either of them is chosen as the main protagonist in Trials of Mana, the main villain will be the Dragon Emperor and the final dungeon will be the Dragon Hole.

At first, Duran is a straightforward sword user with above-average Strength and Vitality stats. Upon changing classes, Duran can learn some magic to supplement his physical abilities. His Light classes learn primarily healing magic, whereas his Dark classes mainly focus on adding elemental attributes to weapons. Duran's Light classes have another benefit: they are the only classes capable of equipping shields, which greatly boost the wearer's Evasion stat.

Below is a list of skill attacks Duran learns across his different classes:

Duran learns spells that can change the elemental properties of the characters' attacks, although his Light classes can also learn healing spells.

Below is a table of spells Duran learns across his different classes:

Having come to the conclusion that the way of the sword is a means by which to protect others, the Knight builds on this resolve in body and mind. His skill and prowess with a sword increase as he fights, and he learns the value of shields to blunt blows, but he comes to find a light within himself, born of compassion and duty, that can sustain himself and others in times of need.

Seeking to find meaning in the fight, the Gladiator undertakes a journey of seeing struggle and competition underlying within all things in the everyday world. Even into honor and trust, the class ekes out the need to justify their efforts through coming out on top or with satisfying results brought about through proof through tests and testaments of action. To these ends, so has the Gladiator sought the powers of enchanting magic to bestow themselves with power of many varieties, and with a higher aptitude of strength than the Knight.

When mortals wish to frighten each other, they tell stories of demons and ghouls. When demons want to scare each other, they tell stories of Paladins. Unrelenting, unshakable, and unstoppable, a Paladin leads his allies with a sword burning with holy light, dealing devastating blows to all who share allegiance with the underworld and healing his allies before death can take them. His skill with a blade is such that he has learned the "Flashing Sword" technique, a skill that strikes foes far and near with incredible force, meaning there is no safe distance to engage the Paladin.

Many swordsmen come to a terrible conclusion after years and years of battles- no amount of skill with a blade can ever make it heal injury. A father to his soldiers, the Liege forgoes the direct attacking power of other swordsmanship paths to expand his knowledge of healing magic, learning to heal himself and allies all at once, as well as removing poisons, illnesses, and other foul ailments. Those who mistake this focus for weakness do so at their own peril- a Liege and his allies are a force that all too often simply will not lay down and die.

Long lived and weathered in a world of battle, the Edelfrei is a class of experience and wisdom through the heat and heart of the fight. Knowing the boundaries of life and death with familiarity, so does the Edelfrei precariously walk in and out of its realm frequently through their edification long done many times before, and does so without fear. Drawing upon lessons and teachings from these experiences, so has the Edelfrei tempered their body and mind to become a lone warrior with their own principles, with sword, body and soul able to act as one with the world as if their being has transformed into forces of nature beyond what can be struck down, and walks onwards to see the next day after the carnage of the day before. Rumors tell of warriors from a realm far from Fa'Diel saw their philosophies and virtues passed into the world long ago, and those who had grown beyond their days as Gladiators saw their destiny encounter their ways into Edelfreis.

The meaning of the fight having eluded them long ago, the Duelist seeks but only one thing: Victory. With all matters of honor and code cast to the wayside, for the Duelist, the fight is nothing more but a means to achieve that; a frequent occurrence as but a process and pastime of violent frequency to attain its rewards, graces, and glory at any cost necessary. Walking the narrow and dangerous path of mortal combat with the reaper never far, easily lost in even the most savage instances of carnage and brutality, able to face the most harrowing of battles, and enter storm like tension without a wince, so have Duelists gained a reputation of being fighters of a dark strength steeled from their world of deathly competition and merciless domination, where only the victorious may thrive in their world of kill or be killed, and weakness is only rewarded with death.

Duran comes to wield swords. As he progresses in terms of classes, Knight classes bear swords of fair and identical construction akin to the Mana Sword for symbols of honor and united varieties of power, while Gladiator classes come to bear swords for their relentless destructive and cutting features for pure power and a dominant edge in combat.

Official artwork of Duran in his Paladin class.

Official artwork of Duran in his Duelist class.

Official artwork of Duran attempting to face off against the Crimson Wizard for the first time.

Artwork from the 2020 remake's cover

Render of Duran in his starting class from the remake

Render of Duran in his Knight class from the remake

Render of Duran in his Knight class from the remake

Render of Duran in his Gladiator class from the remake

Render of Duran in his Gladiator class from the remake

Render of Duran in his Leige class from the remake

Render of Duran in his Paladan class from the remake

Render of Duran in his Duelist class from the remake

Render of Duran in his Edelfrei class from the remake

Key Artwork for Duran and Angela's storyline for the remake

Retrieved from "https://mana.fandom.com/wiki/Duran?oldid=20861"
Community content is available under CC-BY-SA unless otherwise noted.