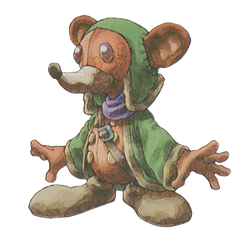 Official artwork of a Dudbear from Legend of Mana.

Dudbears (アナグマ Anaguma) form a clan of anthropomorphic bears who slave for Roger's Diggers in Legend of Mana. Initially leading simple, unperturbed lives as labourers for Roger's mining business, the Dudbears are later forced to join the cult that he constructs around his pet dog Putty.

Simple-minded, naive and innocent to a fault, the Dudbears collectively present a personality that is starkly gullible and tractable, as they are easily coerced into submitting to figures who possess far more power than they submit to figures possessing more power than they do unquestioningly. This fact alone has resulted in the Dudbears being brutally exploited, the main culprit perpetuating this crime being Roger, who subjects them to backbreaking menial labour in the Ulkan Mines under the twisted motto of "salvation through labour".

The malleability of the Dudbears is further taken towards the extremes through their being coerced into joining Roger in his mentally unsound worship of his pet dog Putty, where their behaviour is specially modulated to glorify it. This fact can be observed in the conclusion of Where's Putty?, where, on command, the Dudbears express "relief" and "joy" after Putty is found.

Retrieved from "https://mana.fandom.com/wiki/Dudbears?oldid=12543"
Community content is available under CC-BY-SA unless otherwise noted.