Chihiro Aikawa
Unknown (SOM; Non-canon)
v · e · d
Dryad (ドリアード Doriādo) is the Mana Spirit of Wood. She appears as a tree, with leaves for hair and roots for feet. She is regarded as being the closest to the Mana Tree and the Mana Goddess, and her powers reflect this, with barriers that reflect magic spells, the ability to revive fallen party members, weapon enchantments that steal magic points, and granting temporary invincibility; for these powers, she is often regarded as the "Mana" or "Life" Elemental. However, she is also regarded as the "Wood", "Tree", or "Leaf" Elemental due to her powers of poison breath, flowers that put opponents to sleep, strangling vines, and other plant-related spells.

Her most notable power is shown in Secret of Mana when both the Girl and the Sprite must simultaneously cast the Mana Magic spell upon the Boy so that the Mana Sword is at its highest potential, and thus can be used to defeat the Mana Beast. Dryad seems to suffer from a low self-esteem in most of her appearances and thinks very little of herself even though she is the Mana Spirit that is closest to the Mana Goddess. 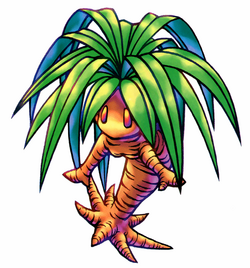 Dryad was obtained after defeating Boison Vine in Cascade Cave. Who helped them remove the regenerating vines blocking the path. She then tries to leave but persuaded to join the team. She's tends to be shy and apprehensive.

She has a Magic-Defence Up support magic and a wood magic that may cause sleep.

Lester also has a dryad spirit.

Another Luna may be obtained/upgraded by: 3 Dudbear gold by a woman named Asaad at Ishe Inn, Night of Dryad Day; trading a wood geode found on Path to Topple to Gazu of Lohimar; rescuing one trapped back in Cascade Cave from a black Dudbear (dryad level must be at least 30); praying to the Gray goddess statue on Mount Illusia, night(dryad must have at least 2 uprade); finding one on Cibba's Camp on a Dryad day(must have at least 10 wood coins and 4 dryads); trading 10 Wood Coins to Frolan of Khala Peaks(dryad must done at least 3 upgrades); and lastly blessing it on Wendel Cathedral, Night of Dryad Day(done at the last)

Upon obtaining all dryads you'll achieve the title Sage. 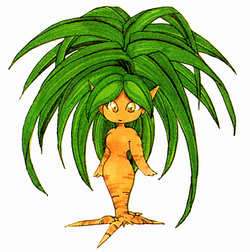 Dryad is obtained in the Tree Palace, shortly before the Lost Continent rises from the ocean. Although most of her magic has been sealed by Thanatos, she agrees to help the heroes anyway. She gives Primm the ability to cast Wall and Revivifier, and also gives Popoi the Sleep Flower and Burst spells. After the Dark Lich is defeated, the seal on Dryad's magic is broken, allowing for Primm and Popoi to cast Mana Magic on Randi. 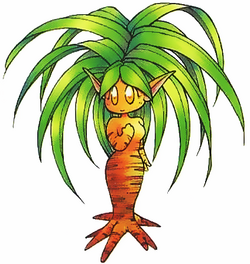 Dryad is the final Mana Spirit obtained by the heroes and is found in Lampbloom Woods. After visiting the elfin village of Dior, the heroes learn of a hidden path in the forest. Following that path leads them to a clearing where they must face off against Grapplavine, a giant plant monster. Defeating it frees Dryad to join the heroes' quest. Dryad is depicted as extremely timid as well as having almost no confidence in her abilities, but the party convinces her to join and give them her best efforts. If either Charlotte or Kevin is the Chosen, Dryad is summoned to open a path through the Jungle of Visions. 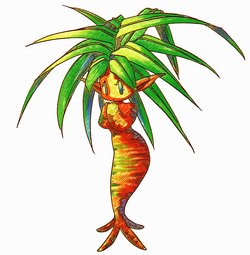 In the world of Fa'Diel, Dryad is regarded as the Spirit of Trees, who governs over the strength of flora. 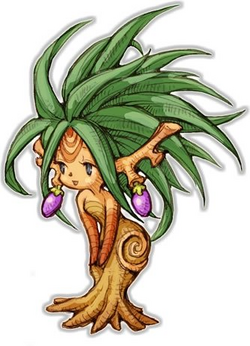 Like her fellow spirits, Dryad can accompany the player character on their treks through Fa'Diel's myriad dungeons. Her attack and support spells, respectively, are as follows: 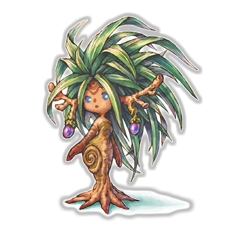 Her spells are Poison Bubble (for D'Kelli), Sleep Flower (for Gemière, Falcon and Valda) and Leaf Saber (for everyone else).

In Dawn of Mana Dryad has a calm disposition, and is willing to wait for others to say their piece before she speaks her mind. She speaks with an Irish accent. Her elemental power can create a mist that puts enemies to sleep.

Dryads originate from Greek mythology, where their name comes from the word δρυς (drys), meaning "oak". Originally bound specifically to oaks, these female wood-nymphs are said to live in many types of trees; therefore the term is used to refer to wood-nymphs in a broader sense.