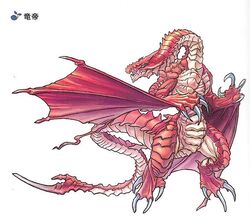 Mana Holyland
v · e · d
The Dragon Lord (Dragon Emperor in the fan translation) is one of the three main villains from Seiken Densetsu 3, along with the Masked Mage and the Dark Prince. He serves as the main villain and final boss in Duran and Angela's storylines. He has the same goal as the other two main villains: steal the power of the Sword of Mana, release the eight Benevodons, and take their powers as well to become a god. His intent afterwords is to create a world of suffering and chaos. He spends most of the game in a humanoid form. His true form is a traditional dragon, and is by far the largest boss in the game - it is so large that his whole body isn't even seen on screen.

The Dragon Lord is also involved in the events of Heroes of Mana, though he never makes an onscreen appearance. He supports Pedda with Dragon units, some of the most dangerous units in the game.

In Legend of Mana, a similar character named Drakonis serves as one of the main antagonists.

Little is known about the Dragon Lord's past. All that's mentioned about him is that he led a large clan of dragons known as the Dragon Folk of the Quon Continent.

For unknown reasons the Dragon Lord sided with Pedda as a silent partner. He did not appear in person but sent troops to aid the Peddan forces (which considering his troops were dragons, played a substantial part in conquering the other kingdoms). He is however a secret boss in a late bonus mission. At the end of the game Loki says they will have to take care of the Dragon Lord eventually, hinting at the backstory of ToM.

The mutual hatred lead to King Richard fighting a war against the Dragon Lord. The details of it are unknown, but the Dragon Lord was apparently enough of a threat to the World that a Faerie was sent to aid Richard. An attack on him, planned by Don Perignon, defeated him when Loki faced the Dragon Lord in battle. The two of them both fell into a bottomless pit and were assumed dead. In reality they both died, but among the Dragon Lord's powers was the ability to manipulate souls, and he was able to keep his own tethered to his remains. At some point his and Loki's remains were happened upon by a young boy who would become known as the Crimson Wizard. Crimson Wizard was a native of Altena trying to learn magic, but was never able to, and was abused by his teacher for it. He had fled Altena in shame and came to the Dragonsmaw for perspective. Taking advantage of Koren's weakness, the Dragon Lord promised to make him the most powerful wizard in Altena in exchange for half his life. Crimson Wizard accepted the offer. The Crimson Wizard gained access to the dark power of the Dragon Lord, and the Dragon Lord used the boy's life force to revive himself. Having seen Loki's strength firsthand; the Dragon Lord used the knight's remains to bind his soul and forcefully revive him as the Darkshine Knight. Now with powerful new servants, the Dragon Lord decided to take advantage of his status as "dead" to run the scene from the shadows. He sent the Crimson Wizard and Darkshine Knight out to set the stage for his return in his plan to gain the power of the Benevodons and become a God.

"I remember a faerie that met a similar fate. She was with the Prince of Valsena and his Knight. I was caught unaware by the Golden Knight and we both fell. It took me so long to regain my strength but now! I am the strongest of the gods!"
—The Dragon Lord

The Dragon Lord spends most of the game in his lair, the Dragon's Hall, while Crimson Wizard and the Darkshine Knight launch attacks to destroy the Mana Stones. Koren also aids in the effort by manipulating the Queen of Reason into starting a war to gain the Mana Stones. Eventually, because of attacks also launched by the minions of the Masked Mage and the Dark Prince, all of the Mana Stones are broken. During this time the heroes also saved the elemental spirits. They try to open a portal to the Mana Sanctuary, but are unable to.

After their failed attempt, the portal to the Mana Sanctuary opens on its own because of the damage to the Mana Stones. Crimson Wizard then goes there with the Darkshine Knight on a large airship. The minions of the other villains also head there. What happens next depends on the whose the main character:

After that, as Crimson Wizard and the Darkshine Knight are unable to take the Sword of Mana from the Tree of Mana, they kidnap Faerie when either Duran or Angela removes it. Faerie is traded for the Sword, after which the eight Benevodons are released into the world. Although heroes kill each of the Benevodons, their power is sent back to the Sword of Mana. After breaking into the Dragon's Hall and defeating the Darkshine Knight, the heroes finally meet the Dragon Lord in person, with him in a humanoid form. The Dragon Lord orders Crimson Wizard to attack them, deciding to let the heroes watch as he absorbs the Sword of Mana and the power of the God-Beasts. To his surprise, the Dragon Lord finds his powers are being restrained by the Mana Goddess, after which he leaves to destroy the Tree of Mana (her current form) to stop her. Crimson Wizard stays to kill the heroes, but loses and commits suicide to escape the pain of losing part of his soul.

The heroes meet up with the Dragon Lord, but he got the Tree of Mana first and destroyed it. His power now unrestrained, he gloats that he is the new god of the world. Faerie attacks him, but he swats her aside easily. The Dragon Lord then assumes his true form and devastates the heroes, but they're all saved by Faerie, who tells the Dragon Lord that they will defeat him and create a new world even without Mana, as long as they have hope. The Dragon Lord snidely mocks them for thinking that. He is then fought and killed after a long battle.

As a final boss, the Dragon Emperor is extremely powerful. He's generally viewed being harder then the Dark Lich, but easier then the Archdemon. He possess the most health of the final bosses, and only takes damage if he's struck in the head, a task made somewhat difficult as he moves his head. As he absorbed the powers of the eight God-Beasts, he possesses some of their desperation attacks, and of the ones he uses lower the stats of the players. Outside from that, he has a few power unique attacks of his own, the strongest being his desperation special attack, Flare.

"Come to and face me and meet your deaths, not unlike the last that challenged me. Prince Richard and the Knight of Gold ... I believe they had a faerie with them as well. That Knight dealt me painful, crippling injuries ... but I have recovered, and grown stronger..."
—The Dragon Lord in the fan translation

Retrieved from "https://mana.fandom.com/wiki/Dragon_Lord?oldid=20715"
Community content is available under CC-BY-SA unless otherwise noted.