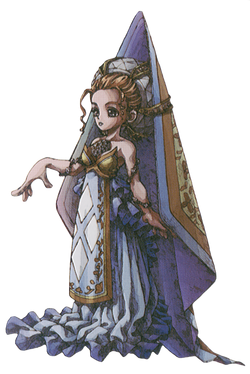 Official artwork of Diana from Legend of Mana.

The Jumi of Diamond
Leader of the Jumi

Leader of Jumi and Guardian

Diana (ディアナ Diana) is a major character from the Jumi story arc of Legend of Mana. The leader of the Jumi, Diana possesses a core of diamond and functions as the Guardian of Rubens. Diana desperately attempts to keep the Jumi from extinction with a hard-headed dictatorship, one that sees her unfeelingly exploiting the Clarius Florina's ability to shed life-giving tears at the expense of the latter's life. This in turn spurs Sandra's decision to betray the Jumi by robbing them of their cores, heralding the near-extinction of the race.

Diana is the guardian of Rubens, the Jumi of Ruby, and his love interest. She is the leader of the whole Jumi race. She has long, braided brownish-blond hair and wears a long white dress with a white diamond on her back. She ended up in Geo disguising as a Venus statue after Bejeweled City ended in ruins and jewel hunters started hunting for their cores. She knew of the Jewel Hunter's identity and her obsessed revenge against the Jumi. She hid in the basement with Rubens knowing her location until she was discovered by Esmeralda, Elazul, Pearl, and Hero/Heroine. She was filled with hopelessness at hiding and surviving from being hunted by the Jewel Hunter until she wrote a note to Sandra telling her to steal her core. Later, she locked her heart and threw away the three keys leaving her crystallized. Her heart was unlocked by Hero/Heroine, Pearl, and Elazul and was about to tell them about Jewel Hunter's intentions until her core was stolen by Sandra. She later ends up in the Underworld being turned to stone even though her core flashes whenever Elazul or Pearl are nearby.

Diana appears in Kristie's Palace basement waiting for Sandra to take her core. She shows Esmeralda where her sister's core is and tells her to escape before the Jewel Hunter shows up. When Esmeralda was kidnapped, Diana teleported Elazul and Hero/Heroine to the arena. After the fight, she tells Elazul to bring his guardian.

Diana is still in Kristie's Palace except this time, she's crystallized. She has locked her heart hoping to escape death from the Jewel Hunter. After Pearl, Elazul, and Hero/Heroine found the keys and unlocked her heart, she was about to tell them about the reasons why Sandra wanted revenge against the Jumi race. Before she could do that, Sandra attacked and summoned the Jewel Beast. After the fight, Sandra snatched her core and left her dead.

Diana appears in her room in the Underworld crystallized like during the 'Alexandrite' event. The only responsive part of her is her core when Elazul or Pearl try to talk to her.

Based on her in-game encyclopedia description and comments made by Sandra, it can be deduced that during the time of the war waged between the Jumi and the Deathbringer, Diana was once a domineering leader, ruling her people with an iron-fist for the sake of preventing their extinction. In order to achieve this end, however, she had proven to be rather ruthless, as she unflinchingly elected to sacrifice Florina, the last Clarius of the Jumi, exploiting her tears of panacea at the expense of her life.

During the events of Legend of Mana, it is quite evident that Diana is but a mere shadow of what she once was; aware that the Jumi's certain annihilation is nigh, she has grown to become rather despondent and nihilistic, hopelessly choosing to give up the struggle and thereafter engaging in self-petrification.

"In ages past, the Jumi were once called the race of friendship.This was because they tried to preserve themselves by giving tears to the wounded. Tears composed of life itself..."

"One light is hidden by another...Only Blackpearl can stop her...Find her!"

"You found my soul.Thank you all for coming."

"The Jumi are doomed. You should give up being a Jumi as well."

"The last Jumi with the power to heal, Florina, is dead. There is no way to bring us back..."

"If you still have hope, then live on as a Jumi."

"I was the one once called Diana, in the Jumi city. Young Jumi Knight, can you save her?"

Retrieved from "https://mana.fandom.com/wiki/Diana?oldid=18623"
Community content is available under CC-BY-SA unless otherwise noted.