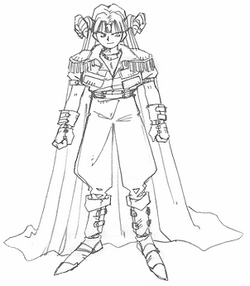 Mana Holyland
v · e · d
The Dark Majesty is one of the three main villains from Seiken Densetsu 3, along with the Masked Mage and the Dragon Lord. He serves as the main villain and final boss in Hawk and Riesz's storylines. He has the same goal as the other two main villains: steal the power of the Sword of Mana, release the eight God-Beasts, and take their powers as well to become a god. His intent afterwards is to merge the world with Mavolia (the Underworld) and rule over it, forcing humanity to worship the Mavole.

The Dark Majesty Stroud was once a human that was the heir and prince of the Castle of Light. Due to a prophecy, he was imprisoned, hated and feared by his subjects. The creatures of Mavolia took advantage of this and made him an offer. In exchange for destroying his own kingdom, he would become their leader's heir and be freed from his prison. He accepted the offer, threw his younger brother (who was in line for the throne) into the ocean and seized the throne of Lorimar, invaded Illusia, and within the Mana Tree was banished to Mavolia in a broken state after his defeat at the hands of his brother while attempting to release the seal on the Mana Gate and fully open the door to Mavolia. Before his defeat he would betray and "kill" the Archdemon who so graciously took him in and thus, became the new Archdemon (though unbeknownst to him Anise survived his attempt long enough to be killed by the same person who bested him during his attempt to unseal the Mana Gate) attaining a new form in the process. After Zable Fahr escaped and then proceeded to destroy many nations - as well as plunge the world into a state of chaos for several centuries - he later drew the Mana Stone of Darkness and Zable Fahr itself to Mavolia.

The Dark Majesty desired to gain the power of the Benevodons to become a god and merge the Mavolia with Fa'Diel. For the plan to work, however, he needed to force the mana stone of darkness back into Fa'Diel. He was aware that channeling the amount of power needed to do that would kill him, so he also ordered his servants to find a human vessel for him to take over afterwards. Two of the Dark Majesty's minions, a shape-shifting creature called Belladonna and vampire-like entity named Malocchio, launched attacks on the Mana Stones under the guise Nevarl attempting to take over Laurent. When Laurent was taken, the Dark Majesty learned of Elliot and had Malocchio acquire him because he saw the young prince as his opposite and thought it made him the perfect vessal. Over time, because of attacks that were also made by the minions of the Dragon Lord and the Masked Mage, all of the Mana Stones were broken. At this point, the heroes had gathered the spirits of each element and attempted to use them to open a portal to the Mana Holyland right when Dark Majesty uses up the power keeping his broken body alive to summon the Dark Mana Stone to Fa'Diel from Mavolia. They prove unsuccessful, but because of the energy released by the Mana Stones, the portal still opens.

Belladonna and Malocchio then went to the Mana Holyland in a silly looking airship. The events that happen next depend on whose the main character:

Off-screen, the Sword of Mana is used to allow the Dark Majesty to reanimate his broken body in Fa'Diel, who watches the events unfold for his base the Dark Castle. After the God Beasts are killed, the heroes break into the Dark Castle, kill Malocchio and Belladonna, and meet the Dark Majesty. He absorbs the Sword of Mana and the power of the God Beasts, and offers the heroes a chance to serve him, which they predictably decline with Riesz demanding her brother back with him refusing to give up the unconscious child. The Dark Majesty prepares to kill them, but finds that the Goddess is restraining his power, and so he goes to the Mana Holyland to destroy the Tree of Mana to kill the Goddess. The heroes follow him, but he gets to the tree first and destroys it. Faerie attacks him, but he swats her away easily, ditches the body his brother Keldric crippled, possesses Elliot, turns into his true Archdemon form and devastates the heroes. They are, however, healed by Faerie, who tells the Archdemon that even if Mana fades away, as long as they have hope they will create a new world without it. The Archdemon scoffs hope as a "petty emotion" and the final battle begins. After a long fight, he's exorcised from Elliot's body and having discarded his real body ends up in the same state as his predecessor Anise.

The Dark Majesty only fights in the game using the power gained from the Sword of Mana and the God Beasts in his Archdemon form. He uses high level elemental spell for a variety of elements, as well as some of the desperation attacks of the God Beasts. The ones he uses mostly have state lower effects on the targets. He switches elemental strengths and vulnerabilities throughout the battle, though non-elemental spells always have the same effect on him. After taking enough damage, the Archdemon transforms into a second, more menacing form. This one doesn't use nearly as much magic as before; the spells he uses during this phase are a time Power Up and Defense Up. For the rest of the fight he relies on attacks of the God-Beasts he used during his first form, but two are replaced with his only unique moves, his attack-lowering Demon Scream, and his most powerful attack, Catastrophe.

He is an extremely strong enemy and is viewed by most fans as the most difficult of the three final bosses in Trials of Mana.

Retrieved from "https://mana.fandom.com/wiki/Dark_Majesty?oldid=20146"
Community content is available under CC-BY-SA unless otherwise noted.