Koren no Madoshi (Wizard of the Red Lotus)

The Crimson Wizard (Wizard of the Red Lotus in Japanese), is an extremely powerful young wizard and a secondary antagonist in Trials of Mana. He is the right-hand man of the Dragon Lord, and the archenemy of both Duran and Angela.

"When I was young, I was unable to use magic. Disgusted with myself, I fled Altena. […] In exchange of half of my life-force, I was given control of the Dragon Lord’s limitless power! […] Soon, the Dragon Lord will be at full power. I only have half of my life as it is, despite my dark power… Is there a reason to go on?"
—The Crimson Wizard telling his story after his defeat

The Crimson Wizard was born in Altena, the Kingdom of Magic in which almost everyone is a mage. For reasons never explained, he was unable to perform magic to his great shame. (The fan-translation adds that he was at odds with Jose, the master of the magic teachers.)

He eventually ran away and ended up in Dragonsmaw, where the Dragon Lord was felled fifteen years before the start of the game. The evil dragon's spirit tempted the boy with the power he craved, offering him access to his own incredible magical might in exchange of half his life-force. The soon-to-become Crimson Wizard accepted and partially revived his new liege, but he soon got corrupted by the Dragon Lord"s dark power.

Now the Dragon Lord's right-hand-man, the Crimson Wizard came back to Altena and used his new-found power to quickly rise in rank. He was appointed as supreme commander of the Altenian army and the prime advisor of the Altenian monarch: Valda, the True Queen.

The Wizard brainwashed Valda and started ruling Altena through her in secret. He had Altena declare war to other nations, with the ultimate goal of unsealing the eight Mana Stones, in which the Benevodons lay imprisoned since the Dawn of Times.

Official info describe the Crimson Wizard as a twenty-year-old, 178 cm tall young man weighing 62 kgs. His power is estimated as equal to the Queen's, Altena's mightiest mage, and is certainly greater as he could make her do as he pleased.

He is equal in power to the Tainted Soul and Belladonna, though he appears the most magic-adept, mastering more attack spells than any other human. Moreover, he masters six elements out of eight with equal proficiency, with the latter two lacking attack spells, indicating his enormous might. Despite all this, he only displays "classical" feats of magic such as teleportation, magical movements, sight and talk where he is not physically present and mind-control, aside from fighting.

Who the Wizard really was before striking his fateful bargain is unknown, aside from his shame at not wielding magic. In his last moments, he realizes how shallow it was and loses all will to live, though he is grateful for the heroes' sympathy. (The unofficial fan-translation implies that he endured contempt and has him display utter self-loathing and regret in the end.) From this, it can be gathered that he was quite nice and affable, if driven by a desire for recognition.

His liege's dark power warped his mind and made him haughty, cruel and sadistic, revelling in his victim's torment and mocking what they hold dear. Ironically for one who suffered from powerlessness, he displays strong contempt for weaker people.

He enjoys toying with his victims and breaking their spirit. He is seen playing cat-and-mouse with Duran, lecturing him and knocking him out when he could have easily destroyed him. He apparently loves to fight, as he is seen laughing endlessly when fought as a boss. He grows increasingly irked by the heroes' meddling, first dismissing them as hapless weaklings, before getting exasperated by their persistence. Despite this, he is a capable general, who trains his troops hard and always fights in the front line, dealing personally with missions instead of sending underlings.

"Poor boy. What senile old fool would entrust the security of his castle to a child? Oh? My apologies. You work for the king, do you not?"
—The Crimson Wizard taunting Duran

The Crimson Wizard personally led an attack on the royal castle of Valsena, where he effortlessly defeated Duran: the kingdom's best swordsman and the son of the Golden Knight who defeated the Dragon Lord at the cost of his life. Duran barely survived and swore to become powerful enough to find, to fight and to kill the Crimson Wizard.

At the same time, The Wizard planned to use Angela, who was also unable to perform magic, as a sacrifice to lift the seal on the Mana Stone of Water. (Each Mana Stone needing a different sacrifice.) He made it appear as a decision of the True Queen herself, and a distraught Angela, using magic for the first time of her life, fled the palace.

During the course of the game, the Three Great Evils (the Dark Majesty, the Dragon Lord and the Masked Mage) are in open conflict; all three wanting to unleash the eight Benevodons on Fa'Diel.

The Crimson Wizard sends the witches of Altena all across, and they send two magic-powered Machine Golems after the heroes, destroying the bridge to Valsena in the process. Later, he and the Darkshine Knight search for the Mana Stones, and he has Valda sacrifice fallen warriors to unseal the Mana Stone of Water. They eventually manage to unseal the eight Mana Stones, while the heroes fight their armies and gathers the Mana Spirits to reach the Mana Goddess.

At one point, Duran confronts the Crimson Wizard again, as he leads hordes of magic constructs in a second attack on Valsena and is about to kill Richard, the Hero King. Duran challenges him, but he just taunts him and teleports away, unimpressed.

When the heroes call forth the Elemental Spirits' power to open a gate to the Mana Sanctuary, the volcano where the Tree of Mana is located, the Crimson Wizard takes profit of their efforts to force an access by releasing the Mana Stones' power. He then blasts the heroes into unconsciousness and flies to the Sanctuary on an Altenian flying warship, quickly followed by the other evil factions.

In the ensuing battle, the main villain slays all his rivals and their servants. If neither Duran nor Angela was selected as the primary hero, the Dragon Lord and his servants will be slain by the chosen Final Boss. Otherwise, after the heroes meet the Mana Goddess and obtain the mythical Sword of Mana, the Crimson Wizard abducts their Faerie guide and demands the Sword in exchange for her freedom.

The Wizard takes the Sword, only to get harmed by its Holy Power, but the Darkshine Knight heals him and they bend the Sword to their will, using it to free the eight Benevodons. He appears to kill the True Queen of Altena whom he no longer needs, in spite of his promise. (In fact he made her disappear but kept her in the Dragon Lord's lair just in case.) He then departs and unleashes the Dragon Lord’s armies of monsters on Fa'Diel.

The heroes track down the Benevodons and destroy them one by one. They then reach Dragonsmaw, the Dragon Lord's lair in the Glass Desert, where they are sarcastically greeted by the Crimson Wizard, who sends a group of powerful monsters against them. The heroes successfully defeat the Darkshine Knight, who is revealed to be Loki (whose dead spirit was enslaved by the Dragon Lord).

The heroes confront the Crimson Wizard and his evil liege, now fully revived. The Dragon Lord wanted them to kill the Benevodons so that their power would be trapped inside the Sword of Mana, enabling him to absorb it and surpass in power the Mana Goddess herself. However, the Goddess thwarts his scheme with her last strength. Irked, the Dragon Lord then goes to the Mana Sanctuary, intending to destroy the Mana Tree, while the Crimson Wizard stays here to get rid of the heroes.

After a long and difficult battle, the heroes manage to defeat the Wizard, who comes back to his senses and tells them his story. Seeing no point in going on, the Wizard thanks the main hero who tried to rise his spirit, before committing suicide. After an unexpected moment of grieving, the heroes head to the Mana Sanctuary to stop the Dragon Lord once and for all.

The best way to deal with him is to boost the heroes and to weaken him as much as can be, before harassing him without end with weapons and special techniques. Decreasing his magic stats weakens his attacks. Healing is necessary as soon as life-points drop under at least 200 but it is wise to avoid too powerful attacks lest he retaliates with a devastating spell. When his life-point run low, he starts casting Ancient Curse: the deadliest spell available, which conjures MANY explosive meteors and deals crippling damages to every hero.

Casting Moon Saber makes the heroes regain some life-points they make him lose with physical blows. And with the Counter Magic spell or Matango Oil item, each spell the Wizard casts are reflected back and deal damage, (with the exception of Ancient Curse and the multi-target spells). With those tricks, victory is almost certain. 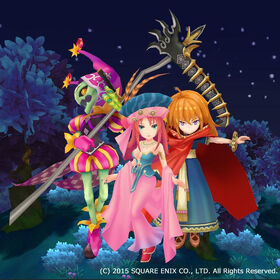 The Crimson Wizard, Belladonna and Goremand make cameo appearances in the mobile phone game Rise of Mana. They serve both as bosses and allies fighting alongside the heroes, even against themselves. They can be faced individually or altogether.

It features two heroes from warring species of the Spirit Realm, the divine Rasta and demonic Daruka, who are sent into the physical planes sharing a body and forced to cooperate. In the end, everything is revealed to have been a successful plot of the Mana Goddess to bring peace between the two species.

When fought as a boss, the Crimson Wizard hovers over the ground flanked by two dangerous machine monsters. He is fast, powerful and resilient, and casts dangerous spells. The heroes must dodge his attacks and pummel him at close range, but spells also work against him.

The two machines deliver whirling blows and turn their head into cannons. The Crimson Wizard uses Fire Magic to conjure two fireballs on each side that blast purple beams, or to conjure from the sky a fireball that causes a huge explosion. He uses Water/Ice Magic to conjure blue circles on the ground, causing huge icicles to erupt from them before they vanish in a circle of blue vapour. He uses Wind/Thunder Magic to conjure many thunderbolts at once.

When fought alongside the other two, they form a considerably dangerous team that unleash long-range and close range combos. Be very careful and dodge and counterattack rather than rushing blindly.

Like nearly every character of the Mana series, the Crimson Wizard is playable in the card-based role-playing game Circle of Mana. The characters are played as cards to save the Mana Tree from monsters, and can gain power, equipment and Class Changes. Several cards featuring him are available, each evolving following a distinct path.

The Crimson Wizard, Belladonna and Goremand make cameo appearances in the crossover arcade strategy game Lord of Vermilion III, which features collectible cards and battles in open space while controlling units, consisting in characters from many Square Enix games. They serve as powerful units who fight with their spells from the game. 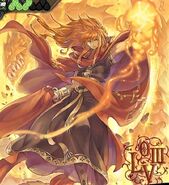 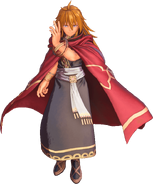 3D Render of the Crimson Wizard from the Trials of Mana remake
Add a photo to this gallery
Retrieved from "https://mana.fandom.com/wiki/Crimson_Wizard?oldid=20722"
Community content is available under CC-BY-SA unless otherwise noted.