The Chocobo is a recurring bird creature featured in the Mana series, first featured in Final Fantasy II.

The chocobo is a large, yellow bird akin to an ostrich or an emu, though far from flightless. Despite its size, its long legs allow it to take large strides and run over vast distances in short periods of time. The chocobo offers its rider a means to avoid detection from other monsters as well. As most birds, chocobos hatch from eggs.

Chocobos are generally friendly and very social creatures, easily tamed and quick to bond with other chocobos or human masters. Though they only vocalize with variants of "kweh", it is often easy to interpret a chocobo's vocalizations by the gestures that accompany them. If the bond between chocobo and master is strong enough, the chocobo can understand its master's speech and react to it in much the same way as a human would.

A boy in Menos mentions that the village used to see many chocobos around the area, even seeing an egg in a forest up north. Sumo ventures into the forest and locates the egg. The egg starts to hatch and a chocobo emerges from the egg. Sumo wonders what the creature is. When he leaves, the newborn follows him. Eventually, Sumo agrees to have the chocobo tag along on his journey.

The Chocobo is left behind at the foot of Crooked Boulder. After Sumo's confrontation with Julius, he finds himself left for dead in the middle of the Crystal Desert. He's rescued by Chocobo, who carries him to Ish. Sumo learns from Dr. Bowow that chocobo's leg was wounded and he mechanized it and gains the ability to go on water. Dr. Bowow also names her Chocobot. Both Sumo and Chocobot head to their next destination, Wendel.

When they reach Lorim, Sumo learns from the king that a monster by the name of Marilith has frozen the townsfolk. Both Sumo and Chocobot venture towards the monster's lair. Unfortunately, Sumo can't take Chocobot with him further when they reach the snowfields due to it being too cold. Chocobot stays behind while Sumo proceeds further.

Chocobot is left outside of Dime Tower. Sumo becomes separated from Chocobot when the tower falls down. 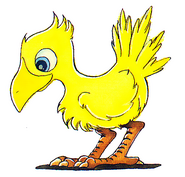 Book art of the chocobo for Final Fantasy Adventure
Community content is available under CC-BY-SA unless otherwise noted.
Advertisement