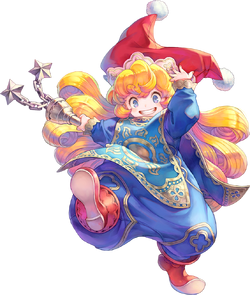 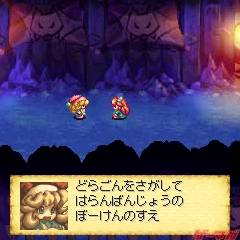 Charlotte (シャルロット, Sharurotto) (Carlie in the fan translation) is one of the six main characters of Trials of Mana.

"I gwew up with no pawents, but thewe was one pwiest in Wendew that was awways nice to me. Heath was kind and hewpfew. He took cawe of me."
—Charlotte

Charlotte, the self-described "cute little girl who lives in Wendel", is the granddaughter of the Priest of Light. Her parents were the cleric Leroy and the elf Shayla, who fell in love despite such unions between elves and humans being forbidden. After both her parents succumb to an illness, Charlotte is looked after by a fellow cleric, Heath, who becomes a sort of father-figure to her. One day, the Priest of Light senses an evil influence in the nearby Castle City Jadd and sends Heath to investigate. Charlotte overhears this conversation and, having a premonition of her own, sneaks out of Wendel to try to convince Heath to come back. Her fears prove to be well-founded when Goremand suddenly appears and kidnaps Heath. Charlotte then decides to do her best to rescue Heath.

Charlotte shares many story elements with Kevin, who lost his wolf pup friend Karl because of one of Goremand's spells. If either of them is chosen as the main hero in Trials of Mana, the main villain will be the Masked Mage and the final dungeon will be the Mirage Palace.

As is befitting of a young child, Charlotte is characterized as having rhotacism and lambdacism in the official English translation, replacing L's and R's with W's.

Charlotte is a somewhat stereotypical healer character, having poor combat skills but access to curative abilities. Once the Mana Spirit Lumina joins the heroes, Charlotte begins learning healing magic. She can learn a wider variety of spells after changing classes: her Light classes give her Light-element attack magic and the ability to add elemental attributes to weapons, and her Dark classes give her summons and a variety of detrimental spells for use on enemies.

As her faith grows, so does the Priestess' power and resolve. Her focus on the healing arts grows in leaps and bounds, able to heal her allies in the blink of an eye during the heat of combat, but now she comes to take a more proactive role in ridding the world of foulness, calling down holy wrath on the heads of those who halt her sacred course, or, when direct smiting isn't feasible, bolstering her allies with magical elements, making their blows all the more fearsome.

The harsh reality of the world can have severe effects on the strongest of faiths, and many a Cleric has been tempted from the straight and narrow mentality of divine magic, studying arts of animation and summoning to provide a more direct approach to resolution of a battle. While the potency and efficacy of her healing magic grows, she forsakes the more supportive studies of divine magic, preferring to call up strange mechanical beasts to assail enemies.

Though the horrors of the world might lead some to abandon their faith, others find the light within them burns all the fiercer. At this pinnacle of devotion, the practitioner of holy magic can end the foul ailments that assail her allies in a flash, hamper magical assaults hurled at her, or even infuse her allies weapons with the power of light to beat back the darkness. Woe betide the unfortunate undead that cross her path, as her faith is such that a mere glance is enough to end their miserable existence forever.

While devout, some who walk the path of divine magic feel that the injury and ills caused by the wicked could be prevented much more effectively if these same sadistic bringers of suffering met more expedient ends. To that end, the Sage retains the healing powers that brought her to this point, but focuses on bringing the more wrathful side of the light to bear on foes, searing enemies with holy fury. While impressive, some would argue that this is the first step to the folly of wrath over mercy. Others, weary of endless hordes of evil-minded men and wicked things, would counter that perhaps the wicked should fear the light.

Having read forbidden texts and learned lessons that cannot be forgotten, some who started on a pure and wholesome path find themselves considering the dread art of necromancy as a means to an end. The world is sadly chock full of adventurers and innocents who met tragic ends, and so the Necromancer finds no shortage of corpses and spirits to send against her enemies, inflicting as much horror as injury in their flailing assaults. When direct assault fails, however, the Necromancer imbues her allies weapons with fell energies, and practices foul curses that leave her unfortunate target a shriveled and withered shadow of their former selves.

One shudders to consider what line of demented thinking could lead a cleric to have fallen to this abyssal point. Having made pacts no sane mind would make, and having abandoned the path of healing and protection, those who survive the Warlock's foul rites and insidious rituals call forth demons and foul things of the abyss to rend apart their foes with terrible strength and unrelenting dark magic. Stripping away magical protections with sadistic glee as she sends the hordes of the underworld after her prey, the Warlock must be ever vigilant in summoning and dismissal of her "friends", lest they spy a crack in her mental armor and devour her like any other.

Below is a list of skill attacks Charlotte learns across her different classes:

Charlotte is capable of learning several spells, which are mainly of a healing variety. She will also learn summoning spells when she chooses the Dark path at Level 18+.

Below is a table of spells Charlotte learns across her different classes:

Charlotte comes to wield flail weapons, be it from maces and ball and chains, to simple linked rods and staves. As Charlotte progresses in her classes, Priestess classes come bear flails to be rooted in holy and anointed origin, symbolic of their use in both observance and armament, while Enchantress classes come to bear flails with more occultish and sinister features, almost as charms and fetishes to attract and draw upon netherworldly power with.

Official artwork of Charlotte from the Super Famicom version

Official artwork of Charlotte in her Bishop class.

Official artwork of Charlotte in her Shamanion class.

Charlotte playing in an unnamed garden with Heath.

Render of Charlotte in her inital class from the remake

Render of Charlotte in her Priestess class from the remake

Render of Charlotte in her Priestess class from the remake

Render of Charlotte in her Enchantress class from the remake

Render of Charlotte in her Enchantress class from the remake

Render of Charlotte in her High Cleric class from the remake

Render of Charlotte in her Sage class from the remake

Render of Charlotte in her Necromancer class from the remake

Render of Charlotte in her Warlock class from the remake

Key Artwork for Kevin and Charlotte's storyline for the remake

Retrieved from "https://mana.fandom.com/wiki/Charlotte?oldid=20820"
Community content is available under CC-BY-SA unless otherwise noted.