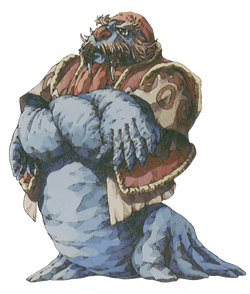 Official artwork of Cap'n Tusk from Legend of Mana.

Captain of the SS Buccaneer
Leader of the Pirate Penguins

Cap'n Tusk (バーンズ Bānzu, lit. Banz) is a character from Legend of Mana. The 38-year-old leader of the Pirate Penguins, Cap'n Tusk is an anthropomorphic walrus who is renowned for his adherence to the etiquette of polite society in his tenure.

Contrary to expectations for Cap'n Tusk to be a courageous, fearless individual who exudes an aura of veneration as the commander of a large following of pirates, he is, in actuality, rather cowardly and easily frightened. This fact is made especially evident in The Gorgon's Eye, where, prior to being petrified by a Faerie and hurled off the cliff overlooking Lake Kilma, Cap'n Tusk is observed to impose the responsibility of offending the Faeries to the Pirate Penguins, insisting that he had no part to play in the act.

Cap'n Tusk's cowardice extends towards his speech register itself, where he shies from articulating words that he considers to be vulgar and offensive. In The Gorgon's Eye, when prompted by the ever-encouraging Penguins to issue a momentous threat to deal with any of their failings, Cap'n Tusk falls short of expectations; asserting that he will "ker-clunk" their heads, he later sheepishly explains that his mother taught him the importance of polite speech.

Retrieved from "https://mana.fandom.com/wiki/Cap%27n_Tusk?oldid=15368"
Community content is available under CC-BY-SA unless otherwise noted.