Wiki of Mana
Register
Don't have an account?
Sign In
Advertisement
in: Article stubs, Quests in Legend of Mana

Step at 20 crabs in Madora Beach

Crab
AltenaAlloy
“Today my master bribed the Dudbears to get some treasure. Oh, so that's how the treasure-hunters get what they want. I see.”
—Cactus Diaries, entry 52


Buried Treasure (南海の砂浜 Nankai no sunahama, lit. South Sea Beach) is a quest and storyline in Legend of Mana. It is part of a series of events that include Cap'n Tusk and his crew (Pirate Penguin Arc). It revolves around the whereabouts of a treasure in Madora Beach.

Cap'n Tusk will reafirm to the Hero/Heroine how Dudbears like money, and give the player 15 halo coins. The player must bribe the Dudbears with them. Cap'n mentions to "quit right there and come back" if the Hero/Heroine is to lose all the coins.

At the east path right at the entrance, a line of Dudbears will be blocking the passage. The player must bribe the middle Dudbear with a coin for them to disperse.

After that, heading into the cave, there will be a portion of Dudbears and Penguins, the later always complaining about how Dudbears "are so annoying". The player must arrange 3 Li'l Bottles and bribe the right-exit Dudbear with them. Only one Dudbear, most close to the entrance, will give bottles in exchange of coins.

Heading to the far right, the player must trade 2 bottles for 2 Pucashells with a Dudbear roaming around the center, and give one of them to the Dudbear guarding the top-left exit.

At the far left cave, the player can give once again a Pucashell to the far-left Dudbear.

Regardless of this final action, Cap'n Tusk will give the Hero/Heroine a crab and AltenaAlloy. The treasure, unlike in the other events of this nature, is not revealed to the player this time. 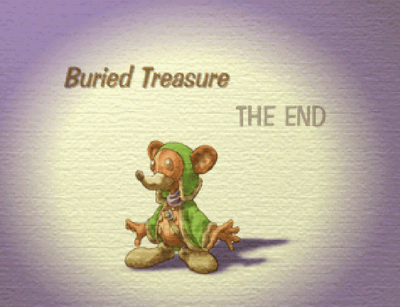 Talk to Ramtieger on the SS Buccaneer to start quest.

The player must have the Pirate's Hook Artifact in possession.

Note 2: Sometimes you can't find the spot you must sail to to activate this event. If you can't, check the sea chart at http://www.gamefaqs.com.

Before you begin this Event make sure that you stepped on 20 or more crabs at Madora Beach.

Enter the SS Buccaneer. Go see Ramtieger and tell him to go West, West, North. Tell the Captain you will help him.

You are now at Madora Beach. Talk to the Captain and get 15 Halo Coins. Use these to bribe the Dudbears. Follow these directions:

Random ore, or nothing.

The Hero/Heroine successfully bribes the Dudbears and gets rid of Roger.

The Hero/Heroine refuses to give the Dudbears a Halo Coin, and thus is taken away by them, leaving the treasure to Roger.