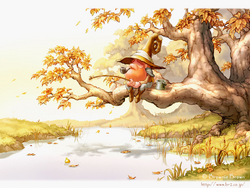 Brownie Brown Inc. (ブラウニーブラウン , Buraunī Buraun) was a Nintendo-funded and owned video game development studio opened on June 30, 2000 and based in Tokyo, Japan. Today, they are best known for their work on the Professor Layton series for Level-5. Several staff members later formed an independent company called Brownies, while the original company changed its name to 1-UP Studio.

The company itself consists of many ex-Square Co., Ltd. artists. Two of its founders had previously worked on the award-winning Mana or Seiken Densetsu series on the Game Boy and Super Nintendo gaming consoles. The founders left Square due to "differing ideals."

The company's first original creation was the Japan-only Magical Vacation for the Game Boy Advance, which was released in 2001. Another popular title developed by Brownie Brown was Sword of Mana, which was created for and published by Square Enix. Thought to be a new title in the Seiken Densetsu series, it was actually a remake of the first game in the series, Seiken Densetsu: Final Fantasy Gaiden.

Retrieved from "https://mana.fandom.com/wiki/Brownie_Brown?oldid=21410"
Community content is available under CC-BY-SA unless otherwise noted.