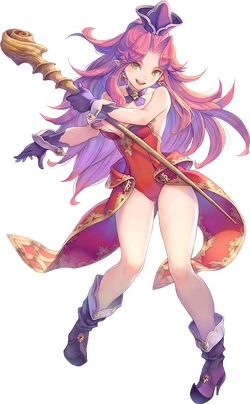 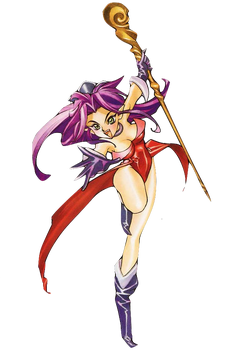 Angela (アンジェラ, Anjera) is one of the six main characters of Trials of Mana.

"Wendel, huh? I don't know what awaits me there, but it's better than getting caught! I'll go. It can't be worse than here. If I learn how to handle my magic, maybe my mother will welcome me back... There's a chance, at least."
—Angela

Angela is the only princess of the ice-covered Altena, Kingdom of Sorcery. Her mother, Valda, the Queen of Reason, uses her magic to keep the Altenish citadel in a perpetual spring. However, like her country, Valda is cold and unfeeling towards her daughter, who has become lonely and selfish as a result of her upbringing. The fact that Angela is the only person in Altena who cannot use magic does not improve her disposition. As the world's Mana starts to fade, the Queen's spell weakens, and winter begins to return to Altena. In order for her spell to continue and prevent Altena from freezing over, Valda, following the advice of the Crimson Wizard, decides to invade other nations and claim their Mana Stones. Once done, she would make use of an ancient spell intended to unlock the power of Mana kept in the Stones, opening the way to the infinite power found in the Sword of Mana, letting her spell continue. Unfortunately, the spell for unlocking the power of the Mana Stones requires the user to sacrifice a life when it is cast; Valda decides to sacrifice her own daughter to power the spell.

When Angela learns of this, she unwittingly uses her latent magical powers to teleport out of Altena and into the Sub-Zero Snowfield. She soon succumbs to the cold and collapses, but citizens from the nearby town of Elrand find her and nurse her back to health. After receiving counsel from a wandering fortune-teller, Angela decides to travel to the Holy City Wendel and ask the Priest of Light for guidance.

Angela shares many story elements with Duran, who lives in Valsena, one of the many kingdoms Altena tries to invade. If either of them is chosen as the main hero in Trials of Mana, the main villain will be the Dragon Emperor and the final dungeon will be the Dragon Hole.

Angela is a somewhat stereotypical "mage" character, having weak physical abilities but access to a variety of powerful magic. Though Angela cannot use magic at first, she begins to learn spells with the help of the Mana Spirits that join the heroes on their quest. Changing classes allows her to use more powerful spells; Angela's Light and Dark classes primarily allow her to use more powerful Light and Dark magic, respectively. Her Light classes have a larger focus in causing large amounts of damage to multiple enemies while her dark classes focus more on focusing damage on one target.

The Sorceress is the path both expected of the Magician and respected by all who know the rigors of the arcane, and not without good reason. Having tempered a lust for power with reason and focus, the Sorceress calls down incredible destruction on her foes- blizzards, firestorms, lightning and rock slides all serve as warning to those who would waylay her. While her skill with dark magic wanes, the power of light beckons, offering a powerful ray of scorching light that reduces unholy foes to ash.

Rather than an interest and focus on the path of methodology, proper rites, and traditionally proven workings of magic to utilize it as it is, the Mysticist has instead directed their focus on seeking the ways of achieving greater magical power itself to bend all phenomena to their whim. However, such a path veers nearest the temptation of achieving power at any cost and the will to even undergo the ways of the dark arts.

Those who are afraid of the darkness have never seen what the powers of light can do when roused. Some practitioners of war magic feel that some holy force has called them to learn such terrible things, that the wicked would remain afraid and hesitate to wage open war. Having all but abandoned the dark arts, the Grand Diviner does not so much fight evil as she reduces it to very small bits, spreading her magics to envelop enemies in a cornucopia of elemental pain.

The path taken by those whose practice of magic is for the sake of the practice of magic. Redundant as it may sound, this pragmatic, life-long study of what magic is and is not allows the Archmage to have an understanding of the elementals that is free from both holier-than-thou or megalomaniac mentalities. Her skills with magic go beyond mere recitation of spells, having developed an almost first-name basis relationship with the four prime elementals Salamander, Gnome, Undine, and Jinn. This bond is such that she can call on them directly to wreak havoc on those who would interrupt her study with banditry and other such unsavory diversions, meaning that most Archmages are left well enough alone.

Considered the true embodiment of the dark arts of magic, the Rune Seer has achieved their mastery through reinforcing their quest for ultimate magic power through controlling such might through the ways of harnessing by incantation and binding such forces upon call through evocation. Utilizing the power of knowledge, the Rune Seer has vigorously studied long lost languages of mystical influence and magical power believed to tie deeply into the fabric of creation itself, and through their influence, summons terrifyingly great forces of nature upon their recital. As such, the might of Rune Seers call upon spells of such order and chaos that though their magic brings about unmatched spell power, their aftermath is dangerously unpredictable to their intended recipients.

Considered to have strayed far from the path of contemporary magehood, the Magus has reached the echelons of attaining what can be called the ultimate level of magical power. Delving deeper into study than any typical practitioner of magic, the Magus has rediscovered lost and ancient methodologies to apply that excel anything the current world sees in use; however, whether they know it or not, such methods tapped into discovered at their era were decided to be forgotten: considered with potential of great danger and abuse, these ways were then cast down as taboo, and were abandoned for the sake of such forbidden practices to never ravage the world again. Now in command of these forsaken powers, heaven and earth trembles in the face of such magic that indiscriminately destroys and decimates all who stand in the way of its caster.

Below is a list of skill attacks Angela learns across her different classes:

As a spell-caster, Angela is capable of learning a plethora of spells, which are all of the offensive variety. Depending on her final class, Angela will also learn an ultimate spell unique to that class as well.

Below is a table of spells Angela learns across her different classes:

Angela comes to wield wand like staves that are enchanted to help augment and strengthen her magic and mind. As Angela progresses in terms of classes, Sorceress weapons are made in mind to help discipline and draw out its wielder's inner power in balance with its own enchantments, while Mysticists come to bear staves rooted in construction from occult and even forbidden rituals to bestow its user with unparalleled magic power.

Official artwork of Angela in her Grand Divina class.

Official artwork of Angela in her Magus class.

Artwork from the 2020 remake's cover art

Render of Angela in her initial class from the remake

Render of Angela in her Sorceress class from the remake

Render of Angela in her Sorceress class from the remake

Render of Angela in her Mysticist class from the remake

Render of Angela in her Mysticist class from the remake

Render of Angela in her Archmage class from the remake

Render of Angela in her Grand Diviner class from the remake

Render of Angela in her Magus class from the remake

Render of Angela in her Rune Seer class from the remake

Key Artwork for Duran and Angela's storyline for the remake

Render of Angela in a new Dark Side 4th Tier class from the remake
Add a photo to this gallery
Retrieved from "https://mana.fandom.com/wiki/Angela?oldid=20833"
Community content is available under CC-BY-SA unless otherwise noted.