Wiki of Mana
Register
Don't have an account?
Sign In
Advertisement
in: Characters, Sword of Mana Player Characters, Heroes,
and 2 more

Amanda is one of the partner characters in Sword of Mana.

Amanda was born to unknown parentage, and gained a younger brother, Lester, before both parents died in unknown circumstances. She is first seen in the dungeons of Granz Castle as a gladiator-slave alongside a blond-haired boy and a brown-haired boy named Willy. Despite her circumstances, she maintains a positive attitude which helps the others make it through day to day, though she still hopes to escape and reunite with her brother. She eventually makes her escape from the dungeons alongside the other gladiator-slaves shortly after Hero and Willy make theirs.

Amanda is seen again on the outskirts of Menos, her hometown, where she finds Hero after he falls from the Airship. She carries him back to her house in Menos so that he can recuperate. Amanda is worried that Hero might die from his injuries, and when Devius enters the scene offering medicine in exchange for the Mana Pendant, Amanda accepts, leaving for Jadd after administering it to uphold her end of the bargain.

Upon reaching Devius' manor in Jadd, Amanda comes across Medusa. Hero appears shortly afterward, having followed her, and after hearing a bird singing the ode to Granz that he had heard Lester sing in Wendel, he determines that the bird is Lester. His suspicions are confirmed when, after Amanda attempts to free the bird by attacking its birdcage, Medusa casts a spell at her which, due to Hero's quick reflexes, hits a Rabite instead, turning it into a bird. Medusa then attempts to escape and, after incapacitating two maids who attempt to calm her, succeeds, heading for the Altar of Time hidden in the Prickly Desert. Hero frees Lester using the keys found on one of the maids and Amanda joins him in following Lester who, in turn, follows Medusa.

After finding Medusa in the inner sanctum of the Altar of Time, Amanda pleads with her to return Lester to human form. However, Medusa, under stress, transforms into a monster, and Amanda and Hero are forced to defeat her. Following the battle, Heroine and Bogard arrive. Heroine heals Medusa, who reveals that her blood can be used to restore the birds, but is unable to let them "partake of [it]" before she dies. At this point, Devius appears and, enraged at his mother's death, gives the Mana Pendant to Dark Lord, who had accompanied him. After they leave, Amanda, due to being bitten by Medusa during the battle, begins transforming into a medusa herself. Heroine tries to heal her, but Amanda, unable to control herself, attacks her. Lester sings his song and Amanda regains control long enough to beg Hero to kill her before she loses herself completely. Hero reluctantly does so but Heroine manages to heal her. This gives Amanda enough time to use her blood to restore Lester, and have enough collected to do the same for all the other bards, before she dies.

In battle, Amanda comes equipped with a lance and Jinn magic. She only joins in Hero's storyline. 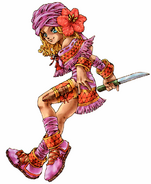 Sword of Mana
Community content is available under CC-BY-SA unless otherwise noted.
Advertisement